The real possibility of using this technique for genetic modification of the human germ line, which could have serious and unpredictable consequences in the individuals treated and their offspring; it could also definitively lead to the introduction of transhumanism in society.

Since the emergence in 2012 of the genome editing technique known as CRISPR-Cas9 [1], its use has rapidly expanded, as reflected in a notable increase in the number of publications, patented applications and funding awarded for this research area within a short period of time. A very comprehensive report has recently been published in international science journal Nature, explaining the trajectory of CRISPR-Cas9 and the different fields of application of this technique [2], which we shall discuss in this report.

The technique consists of using an RNA fragment that has a dual function: On one hand, it acts as a guide to find the piece of DNA to be modified and binds to it, while on the other, it recruits a molecule whose function is to cut the DNA, as if it were scissors (Cas9 enzyme). This enables the desired pieces of DNA to be cut, allowing the modification or removal of specific sequences. Unlike other gene-editing methods, CRISPR-Cas9 is cheap (around 30 US dollars per sequence), quick, and easy to use, and as such has been widely implemented in numerous laboratories worldwide. Furthermore, it can be applied in a large number of entities, and does not have to be limited to traditional model organisms. CRISPR pioneer Jennifer Doudna of the University of California, Berkeley, is compiling a list of CRISPR-altered creatures, which to date “has three dozen entries, including disease-causing parasites called trypanosomes and yeasts used to make biofuels” [2].

Nevertheless, while CRISPR appears to have much to offer, some scientists are concerned that the breakneck pace at which the technology is developing leaves little time for adequately assessing the ethical and safety issues that might arise as a result of these experiments. These are largely derived from the qualitative leap that this technique has meant for human genetic modification, although its application in other fields also requires the attention of bioethicists.

CRISPR-Cas9 can provide a powerful approach to the treatment of many human diseases, including HIV/AIDS, haemophilia, sickle cell anaemia and several forms of cancer [4]. The first clinical trials could take place within a year or two, and will likely consist of either injecting CRISPR directly into the tissues, or removing the cells, engineering them in the laboratory and putting them back into the organism [2].

Be that as it may, the technique is not yet well enough developed to be able to use it in a completely safe and efficient manner. The main challenge is to increase the efficiency of the genome editing, while ensuring that unwanted changes are not introduced in other parts of the genome. Dr. Keith Joung of the Joung Lab of Massachusetts General Hospital and Harvard in Boston is worried. He studies gene editing and has been developing methods to “hunt down” Cas9’s off-target cuts. According to him, “the frequency of such cuts varies widely from cell to cell and from one sequence to another: his lab and others have seen off-target sites with mutation frequencies ranging from 0.1% to more than 60%. Even low-frequency events could potentially be dangerous if they accelerate a cell’s growth and lead to cancer” [2].

Another line of research consists of genetically modifying animals so that they can be used as a study model of disease. Doudna has expressed serious concerns regarding safety [2]. At a meeting in 2014, she saw a postdoctoral fellow present a study in which a virus was engineered to insert the CRISPR components into mice, with the animals simply breathing in the virus. The CRISPR system gave rise to mutations, creating a model for human lung cancer [5]. Any mistake could lead to CRISPR also working in human lungs, causing cancer. “It seemed incredibly scary that you might have students who were working with such a thing,” Doudna says. “It’s important for people to appreciate what this technology can do” [2].

APPLICATIONS ON THE GERM LINE 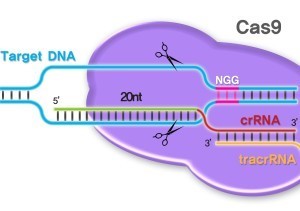 CRISPR-Cas9 can also be used to genetically modify the human germ line, i.e. by introducing foreign DNA in the gametes or the early embryo, which will be passed on to any children and to future generations. This possibility has sparked a lively debate in the international scientific community, especially after an article was published in April in which a group of Chinese researchers reported that they had edited embryo genomes using this technique [6]. One month earlier, two groups of scientists and ethicists had each published articles in science journals Science [7] and Nature [8] on how to act regarding this application of CRISPR. The two articles reflect the existing dichotomy in the current debate in this respect. There is a consensus on prohibiting research on the germ line that could result in babies, but the dividing line is whether to permit in vitro research.

A serious risk posed by lifting the ban on germ line modification is that this could lead to its subsequent application for clinical use, i.e. in humans, with unpredictable phenotypic consequences which, moreover, will be transmitted from generation to generation.  It could also be used non-therapeutically, i.e. for human enhancement. The use of these techniques to modify the germ line has also been criticised because it could discredit technology which is otherwise highly promising in other fields of application.

CRISPR can also be applied in crops and livestock. Previously, the gene was inserted into the genome at random positions, but this process is inefficient, implies mixing the DNA of different species and can inactivate other genes in the organism. Moreover, it is very difficult to obtain approval for the use of genetically modified crops, although CRISPR could change that situation. “In the past few years, researchers have used the method to engineer petite pigs and to make disease-resistant wheat and rice. They have also made progress towards engineering dehorned cattle, disease-resistant goats and vitamin-enriched sweet oranges” [2].

Despite the potential benefits, these applications could also pose problems that should be considered. The precision of CRISPR makes it difficult for farmers to identify a modified organism once outside the laboratory, or to detect whether an organism as been mutated conventionally or by genetic engineering. This alarms opponents of genetically modified crops, and raises difficult questions for countries trying to find a way to establish regulations for genetically modified organisms [2].

Another application of CRISPR consists of using it on organisms in their natural habitat. The method consists of combining this technique with so-called “gene drive”. Gene drive enables an edited gene to spread rapidly through a population, because although only one of the progenitors may contain the mutation, the mutation copies to the DNA of the other progenitor, so the change is transmitted to all the offspring. If it negatively affects the organism, the number of offspring will be reduced, which could result in the disappearance of an entire population within a short period of time. Thus, it would be possible to wipe out disease-carrying mosquitoes, eliminate invasive plants or eradicate herbicide resistance [2].

However, the consequences for an ecosystem of altering or eliminating an entire population are worrisome. For example, other pests could emerge, or predators higher up the food chain could be affected. Moreover, the sequence inserted could mutate and target unwanted parts of the genome, with unpredictable effects [2]. In 2014, George Church, a bioengineer at Harvard Medical School in Boston (USA) and a team of scientists and policy experts wrote a commentary in Science [9], warning researchers about the risks and proposing ways of protecting against the accidental release of experimental gene drives. Kenneth Oye, a political scientist at the Massachusetts Institute of Technology and lead author of the Science commentary, says: “It is essential that national regulatory authorities and international organizations get on top of this — really get on top of it” [2].

CRISPR-Cas9 is a promising technique that could lead to major breakthroughs in very diverse fields. However, as the potential application of genome editing grows, risks appear that must be rigorously analyzed. The most significant among these is the real possibility of using this technique for genetic modification of the human germ line, which could have serious and unpredictable consequences in the individuals treated and their offspring; it could also definitively lead to the introduction of transhumanism and designer babies in society. Other applications in the field of medicine, agriculture, livestock and the environment are less controversial, although the risks involved should also be taken into account so that all the necessary precautions can be taken in the various studies.