The ethics of synthetic biology. The production of “new” organisms

It is a promising technology that raises new ethical and philosophical issues, but which may also open great new opportunities for improving human life

The aim of synthetic biology is to produce new biological systems that can be used to improve those currently existing, or to create new ones.

The ethical debate on synthetic biology has taken a different route to discussions on gene therapy, since in the latter the ethical problems basically arose due to objective failures in the technique itself, even resulting in the deaths of some patients. 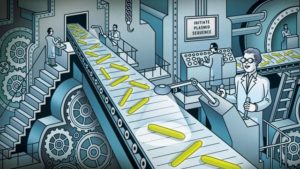 In synthetic biology, these types of regrettable accidents have not (yet) occurred, so the ethical reflection turns more naturally to examining the techniques themselves and their possible applications in more depth.

Despite the interest that it arouses, the technique of synthetic biology is still a young field, as a recent consultation in PubMed detected fewer than 100 entries using the search term “synthetic biology, DNA and ethics”.

Some consider that this lack of ethical references is because this new biological field does not present any major ethical problems, but it is more likely that profound reflection on the topic has not yet commenced.

Safety of the techniques

One issue that was raised on the ethics of synthetic biology is whether a moratorium should be proposed for this type of research, as has occurred in other scientific areas (Asilomar, for example), especially as concerns the safety of the techniques. This seems reasonably assured, however, so the ethical problems may arise more around “social justice and biodiversity”.

With respect to humans, synthetic biology may provide objective breakthroughs in the treatment of various diseases, the development of new drugs and vaccines, facilitate tissue regeneration or even the production of completely synthetic cells.

Therefore, the possibility of generating new biological systems, which do not presently exist in nature, or reconstructing or modifying others that do not exist right now, may result in bioethical problems on the moral status of life, reflection on the risk/benefit of new technologies and the implications that these could have for future generations.

To delve a little deeper into these questions, a major European project was conducted between 2009 and 2012 under the European Commission´s Seventh Framework Programme: Synthetic Biology for Human Health: the Ethical and Legal Issues. See other initiatives in this field HERE.

Within this general framework, specific aspects considered were the relationship between synthetic biology and the philosophical and ethical issues that may arise around the concept of life.

In any case, Synthetic Biology is a promising technology that raises new ethical and philosophical issues, but which may also open great new opportunities for improving human life.