Numerous complications could go unnoticed in this study

On 26th July, the journal MIT Technology Review  announced that the CRISPR technique (see HERE) had been applied in human embryos for the first time in the United States, in a study led by embryologist Shoukhrat Mitalipov of Oregon Health and Science University.

Gene editing has previously been performed on human embryos on at least three occasions in China. Accordingly, two articles from 2015 (see HERE) and 2016, respectively, reported the application of CRISPR on non-viable human embryos (see HERE) . Subsequently, in 2017, another paper reported the application of CRISPR on human embryos, this time viable (See HERE ). In all cases, the results revealed that there are still serious safety and efficacy obstacles before the method can even be considered for use in medical applications. Consequently, the editing was completely successful in only a very small number of embryos, and moreover, there were undesirable effects like mosaicism (when only some of the embryonic cells incorporate the desired change) and off-target mutations.

The findings of the new study were published on 2nd August in Nature. Most relevant, though, is not the fact that viable human embryos have been edited for the first time in the US, but that the problems of mosaicism and off-target mutations found in previous studies appear to have been largely overcome. 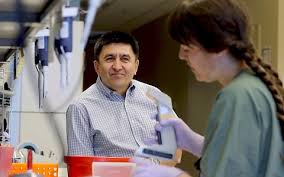 The experiment consisted of correcting a mutation in the MYBPC3 gene, which causes a heart disease. The mutation was found in the DNA of the sperm used to fertilize the eggs. The researchers cultured 131 embryos for three days before disaggregating their cells for analysis. To produce them, the sperm and CRISPR-Cas9 components were co-injected simultaneously into the oocytes. This very early introduction of the gene editing system can apparently circumvent the problem of some cells failing to incorporate the desired change, and reduce the likelihood that the system acts on undesired sites on the genome. It also takes advantage of a unique correction mechanism present in early embryos. After cutting the defective fraction of the gene, the subsequent correction did not occur using the synthetic DNA template provided; instead, the embryo used the healthy copy of the gene (which came from the mother) as a template.

However, the study authors say that the technique “must be further optimized before clinical application of germline correction can be considered”; this would consist of editing embryos and then implanting them in the uterus of a woman, with the aim of creating healthy babies.

Apart from the still unresolved safety issues, another ethical problem with these applications is the unpredictability of the risks for the genetically modified individuals, because the first few days of embryonic development are only a small fraction of the individual’s development process, and numerous complications could go unnoticed in these studies. Another concern is that these types of applications could open the door to the production of “designer” babies. Finally, the manipulation and destruction of human embryos is ethically unacceptable.