Use of pluripotent stem cells in regenerative medicine. Mutation risk

The production of pluripotent stem cells, from which virtually all types of cells can be obtained, may be of great use for the assessment of drugs, basic research and cell therapy. However, when these cells are cultured in vitro, genetic mutations can occur in them, although the extent and nature of these mutations are as yet unknown. 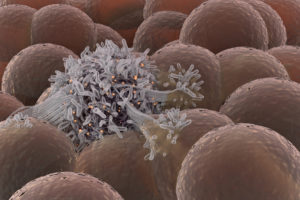 Now, a study published in Nature shows evidence that human pluripotent stem cells are conducive to developing mutations in a gene TP53, which favors the development of cancer cells. In the study, Merkle and colleagues obtained 140 pluripotent human embryonic stem cell lines, which were then cultured. After a few weeks, mutations in the TP53 gene were found in five of the cell lines. These mutations cause the amino acid substitution most commonly found in the genome of adults with cancer. Similar findings were found in iPS cells obtained from adult somatic cells. Moreover, the subset of mutated TP53 cells can invade the normal cell population and even replace it.

This finding is added to others that have shown that, after reprogramming, iPS cells can produce genetic abnormalities, not only a change in a nucleotide but also the deletion or replication of large chromosome regions.

All this suggests that “it will be crucial to check pluripotent cell lines, either embryonic or IPS cells, before clinical testing and, in the future, before their use in regenerative medicine”.