The shortage of human organs and tissues for transplantation represents one of the most critical unmet medical needs today. To address this problem, xenotransplantation, i.e. the use of animal cells, tissues or organs for transplantation in humans, is highly promising, as it would considerably increase the availability of these biological components, and could meet 100% of the demand. Various animals could be used for this purpose, although the most feasible option at present appears to be pigs, since porcine organs are very similar to those of humans in terms of size and function, and these animals can be reproduced in large quantities.

Production of human-animal chimeras, animals in which one of the organs is completely human 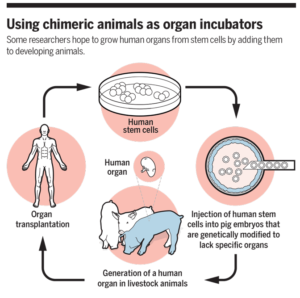 Nevertheless, there are still some technical difficulties that must be overcome to ensure the safety of these transplants. The first is immunological incompatibility, which causes the human body to identify the porcine material as foreign and to attack it, seriously endangering the patient’s life. In order to tackle this issue, scientists recently proposed the production of human-animal chimeras, animals in which one of the organs is completely human — so that the required organ can be harvested and used for transplantation.

Risk of transmission of latent viruses in the pig genome

The second difficulty is the potential risk of transmission of latent viruses in the pig genome, known as porcine endogenous retroviruses (PERV).  These viruses, to which pigs are immune, are “asleep” in their genome, but it has been found that they acquire infective capacity when they come into contact with human cells and could give rise to different diseases, including cancer.

This breakthrough is very positive (excluding the use of human embryonic cells in this particular experiments), because xenotransplantation could have great medical benefit, and is acceptable within an ethical framework.

Now, a study published in Science (see HERE) has demonstrated the possibility of using the CRISPR-Cas9 genome editing tool to remove these PERVs from the porcine genome and thus produce virus-free pigs, whose organs could be more safely used in transplantation. The researchers, including George Church of Harvard University, managed to inactivate 25 copies of functional PERVs in a pig cell line. To that end, they designed a CRISPR-Cas9 system that targets these genes and destroys them. They then selected those cells in which the efficiency of the genome editing was 100% and in which no off-target effects had been generated, and used them to create pig embryos by somatic cell nuclear transfer (cloning). Thus, the nucleus (genome) was removed from the cells and transferred to enucleated egg cells (cells in which the nucleus had been removed), so that they began their embryonic development. These embryos were then transferred to surrogate sows, resulting in 37 PERV-free piglets; 15 of these remain virus-free and will be monitored to study the long-term effects of genome editing on their development. These studies will also shed some light on the functionality, if any, of these latent viruses in the porcine genome, which is currently unknown.

In principle, this breakthrough is very positive, because xenotransplantation could have great medical benefit, and is acceptable within our ethical framework. Nevertheless, it should be noted that the research in the aforementioned study used HEK293T cells, from an aborted human fetus (see Embryo Biological Status). In our opinion, research in this field should use another type of cells that do not come from destroyed human fetuses or embryos (see our paper, the biological status of the human embryo HERE ), so that both the end and the means used are ethically acceptable.