The FBI is requesting information from the US Congress to establish whether Planned Parenthood is selling body parts of aborted babies for commercial purposes, which may go against US state and federal laws, as well as being an inhuman practice. 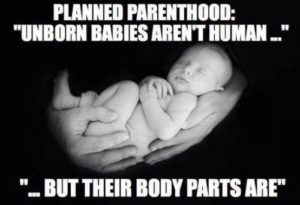 The alarm over this immoral trafficking was first raised in 2015 when the Center for Medical Progress reported that the abortion industry was trafficking and selling the body parts of babies victimized by abortions.

These facts also have been confirmed by a Congressional investigation, which refers to a “systematic” violation of federal laws by Planned Parenthood for trading with body parts from aborted babies.

In this regard, last December, Senator Chuck Grassley (Iowa), informed the FBI that Planned Parenthood and other abortion organizations were trafficking fetal tissues. Although this information has been denied by Planned Parenthood, there is proven documentation that members of the organization were caught on camera by some reporters when they were negotiating the sale of baby hearts, lungs, livers and brains. These facts also appear to have been confirmed by a Congressional investigation, which refers to a “systematic” violation of federal laws by Planned Parenthood for trading with body parts from aborted babies; various videos have also revealed this trafficking of aborted tissues by Planned Parenthood.

These practices have been described as a great atrocity by prominent American celebrities. Suspicions had already been raised about the illegal activities of Planned Parenthood, the largest multinational promoter of contraception and abortion, but the videos recently released to the general public seem to leave no doubt about these immoral practices.