CRISPR-Cas9 causes more damage in the genome than thought

The CRISPR-Cas9 genome editing system causes more damage in the cellular DNA than previously believed, and this is not detected by standard tests, according to a study published in Nature Biotechnology.

While it was already known that CRISPR-Cas9 can produce off-target effects, i.e. outside the desired genome sequence, this study also reveals that, although the system acts on-target, i.e. at the expected site, unwanted mutations occur whose entity is considerable, with large deletions (removal of DNA) and complex rearrangements taking place that could seriously compromise the genetic function.  In addition, many of the mutations produced cannot be detected using standard genotyping methods. “This is the first systematic assessment of unexpected events resulting from CRISPR/Cas9 editing in therapeutically relevant cells, and we found that changes in the DNA have been seriously underestimated”, says the paper’s corresponding author, professor Allan Bradley. “It is important that anyone thinking of using this technology for gene therapy proceeds with caution, and looks very carefully to check for possible harmful effects” (Diario Médico)

Conclusions of the authors of the mentioned article

The authors of the paper conclude that “in the clinical context of editing many billions of cells, the multitude of different mutations generated makes it likely that one or more edited cells in each protocol would be endowed with an important 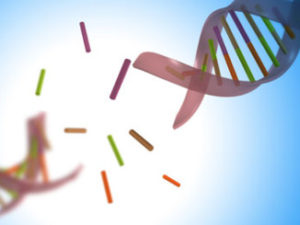 pathogenic lesion. Such lesions may constitute a first carcinogenic ‘hit’ in stem cells and progenitors […]. Results reported here also illustrate a need to thoroughly examine the genome when editing is conducted ex vivo. As genetic damage is frequent, extensive and undetectable by the short-range PCR assays that are commonly used, a comprehensive genomic analysis is warranted to identify cells with normal genomes before patient administration”.

Effectively, this discovery means a new obstacle in the application of CRISPR in gene therapy, i.e. its use in medicine to cure diseases by genetic correction. A recently published article reported that Cas9 could induce an immune response in humans and that CRISPR is more efficient in cells prone to developing tumors, which could favor the selection of these cells when implanting them in the patient (see HERE). Accordingly, it seems that the technique is not ready for application in humans, but the fact is that clinical trials have already commenced.

In the opinion of our Observatory, additional research in animal and human cell models should clarify whether there are further as yet unknown risks and how this tool can be refined so that its use is effective and safe. In view of these risks, clinical trials should be reconsidered, and the eligibility criteria defined with the utmost caution. Likewise, alternatives like base editing, RNA editing or modulation of gene expression using CRISPR should be encouraged, as they may be safer.

See CRISPR might increase the risk that the altered cells, intended to treat disease, will trigger cancer