After the statement from Chinese geneticist Jiankui He that he and his team had achieved the birth of the first genetically modified babies (that our Observatory covered extensively, see HERE), the Chinese government ordered an official investigation that has now confirmed the veracity of these facts.

Jiankui and his team used the CRISPR gene editing tool to inactivate the CCR5 gene in human embryos, giving them immunity to the AIDS virus. Two of these embryos were transferred to the patient, with the pregnancy progressing and resulting in the birth of the first babies with a modified genome. Another pregnancy is also currently underway.

The investigation has revealed that the Chinese scientist falsified documents to pretend that the experiment had been approved by an Ethics Committee. He also used blood samples from other individuals so that the tests would not detect that the men participating in the experiment were HIV positive, as in China, HIV carriers are banned from participating in in vitro fertilization cycles. The university where he worked has announced that he has been formally dismissed. 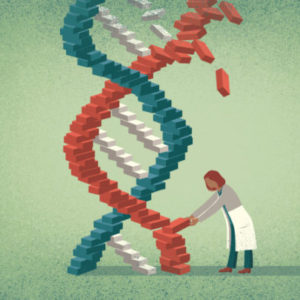 These experiments have been widely criticized by the international scientific community, because the technique is not safe and the changes will be transmitted from generation to generation. Furthermore, in a recent issue of journal The Lancet, the Chinese Academy of Engineering, the Chinese Academy of Medical Sciences and a group of HIV researchers have joined the criticisms, classing the facts as contrary to ethics, morality and legality, and proposing the implementation of appropriate regulations and practical guidelines. They also recommend that the privacy of the babies be protected.

Counterproductive effects of the modification

It is also interesting that the HIV researchers stress how inactivation of the CCR5 gene not only does not mean the cure of any disease (it is a preventive modification), but that it may be counterproductive: “The CCR5 gene has a key role in maintaining proper physiological and immunological functions of the cell. Genetically knocking out CCR5 in healthy human embryos has no scientific basis, could have serious adverse effects, and is likely to have unpredictable consequences”. They also highlight that “HIV is highly mutable and CCR5 is only one of the co-receptors for HIV entry. Therefore, disabling the CCR5 gene would not completely prevent HIV infection” and that “proven effective and accessible strategies already exist for the prevention of perinatal transmission of HIV”. They therefore concluded that this genetic modification “provides no benefit but is likely to have uncontrollable risks to the babies and their future health”.

Should only be condemned genetic modifications with reproductive purposes?

Up to this point, the assessments provided appear adequate. Nevertheless, there is another aspect in which the ethical criterion does not seem right to us. Thus, the three publications condemn only those genetic modifications that have a “reproductive purpose”, understood as the implantation of the embryos in a woman and their development. The modification of embryos for investigational ends, in contrast, would not be reproachable. However, this involves the modification of human embryos for their subsequent use and destruction, which is ethically unacceptable. Scientific advances in this area should be based on research on animal embryos.

In light of this news, the Spanish Bioethics Committee has issued a document stating their position on these events and on germline genetic modification.

The report highlights the importance not only of the safety problems that gene editing poses, but also the ethical and social conflicts. It also states that “in no case, the decision to apply gene editing and the corresponding gene therapy in humans can start from private and singular initiatives, but rather should be taken in a general framework of reflection, deliberation and consensus”. As regards the distinction between genetic modification for curative or enhancement purposes, it states that “although the use of these techniques in the strictly curative field is not exempt from ethical problems, their use for direct or indirect enhancement purposes (mere biology or enhancement genetic engineering), as has happened in the case of the two girls born in China, is absolutely unacceptable and inadmissible, under the requirements of the essential value of the dignity and equality of human beings”.