When technical breakthroughs are made in the field of biomedicine, they are always aimed at achieving positive ends, both experimental and biomedical, but they can very often raise ethical and medical concerns.

Balance between the risks and benefits

This diatribe between the advantages and disadvantages of scientific advances has been going on for some time, but undoubtedly became objectively more visible in 1973, with the first meeting of Asilomar (California). The conference, organized by Paul Berg, was prompted as a result of the experiments by Robert Pollack’s group, who proposed inserting the DNA of an animal virus into a human bacterium, Escherichia coli. After that first meeting, further encounters were held in 1973 and 1974, until a Committee from the US National Academy of Sciences was constituted, which proposed a moratorium for this research until its adverse effects were well controlled.

Biomedical advances are indisputable at this stage, and describing them in general is not possible here, so we shall focus our attention on some specific developments. 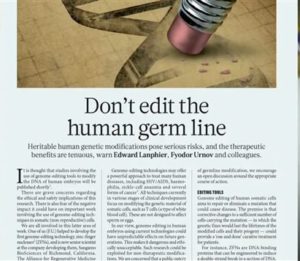 Gene editing has advanced dramatically in recent years with the development of the technique known as CRISPR-Cas 9 (Clustered Regularly Interspaced Short Palindromic Repeats), particularly germline gene editing, i.e. the possibility of modifying the DNA of gametes (eggs and sperm) or embryos. This simple and affordable method enables modification of the human genome, and can be used for various purposes, such as correcting genetic diseases , or improving certain genetic traits in specific individuals. However, it presents biomedical problems, not least of which is the fact that the safety of the technique is not currently guaranteed for application in the human germline, as it could lead to the production of mosaic embryos or other problems in the modified genomes. There is therefore a consensus in the scientific community that gene editing—and specifically CRISPR—should not be used in the production of children, since the risk-benefit balance is presently very unfavorable. Nevertheless, there is a strong tendency to approve its use on human embryos for research, embryos that are then destroyed. In this sense, the U.S. governement recently has baned this kind of research (see HERE) . The first germline gene editing of the human genome was reported in 2015. Other experiments using non-viable human embryos were later conducted, but almost immediately, scientists began to use viable embryos, until in November 2018, Chinese geneticist Jiankui He announced in a video that he had accomplished the birth of the first genetically modified babies, in order to generate embryos resistant to the AID virus (see HERE). However, as far as we are aware, these experiments have not been published in any credible medical journal.

Apart from the aforementioned medical problems, these techniques also raise ethical concerns related with the destruction of human embryos and the possibility of promoting the “enhancement” of specific individuals, which may be the basis of transhumanism and post-humanism, which are ethically very problematic.

This medical practice goes beyond the clinical aspects, as it raises social and ethical issues. The first country to regulate these practices was the United Kingdom, which in December 2016 gave the green light to these procedures in duly legalized clinics.

Given that mitochondrial transfer can affect the germline, its use is only approved in the UK (and, it seems, in Greece and the Ukraine) until clinical trials have been conducted that guarantee that the technique is no danger to patients.

In summary, it appears that mitochondrial transfer—despite already having been legalized in the UK—is a technique that should still be evaluated in depth before its use in human medicine, while the ethical and social concerns that it raises will also have to be evaluated. Even so, children have already been born as a result of these procedures, not only applied in order to prevent the inheritance of a mitochondrial disease, but also to improve the eggs of women with fertility problems. The uncertainties with respect to the possible side effects in the short-, mid- and long-term are significant.

Another technique within this contentious field is obtaining human embryos from artificial gametes. This has been achieved in mice, with scientists having managed to produce both sperm and oocytes in vitro, which have produced live mice when fertilized (see HERE ). The technique itself offers promising possibilities to study embryonic development, and to treat some causes of infertility and other diseases that result from abnormalities in the germline cells. However, before it can be applied in humans, its safety must be ensured, something which has not yet been achieved. It also has ethical difficulties, not least of which is the destruction of embryos involved in these types of experiments, their possibility for use in “human enhancement” and the fact that gametes can be obtained from somatic cells, which could result in involuntary parenthood (see more HERE).

Another ethically controversial medical field is the area related with the production of so called “embryoid bodies” (in vitro models of embryonic regions obtained from stem cells).

These models could theoretically be used for several purposes, but the production of “embryoid bodies” still presents unquestionable ethical issues that must be resolved in order to realize their full potential. At the same time, their use is not free from ethical problems, because the time may come when it is not easy to determine whether or not the products generated are living beings of our species.

The production of human-animal hybrids (read more HERE) is another technical medical breakthrough with contradictory medical and ethical aspects. The technique essentially consists of introducing human stem cells into early animal embryos, so that “humanized” tissues or organs can be created from the individual produced. From a medical point of view, this practice could facilitate the production of organs, much needed in the field of organ transplantation, but it also presents medical difficulties, such as the possible transfer to humans of pathogenic agents that may be found in the animal used, especially pigs. From an ethical point of view, these techniques raise major objections, including the possibility that the transferred human cells could colonize the gonads or brains of the animals, with the ethical uncertainty posed by the possible humanization of the products obtained.

Similarly, in the field of organ transplantation, this controversy arises between the positive and negative aspects, both medical and ethical. From a global perspective, there is certainly no doubt as to the goodness of these practices, as long as there is a proper balance between the risks and benefits. In this regard, we believe it interesting to point out the statements of the current director of the Spanish Transplant Organization in relation to uterus or womb transplantation, who remarked on “the enormous ethical questions that this technique entails for both the recipient and her baby, not only because of the medical-surgical procedure itself, but because of the side effects that the immunosuppressive drugs may have on the mother and child” (see more HERE)

Similar problems also arise in the field of reproductive medicine. While we hardly need mention its positive aspect that means that some parents can have their much-wanted child, these practices also have negative aspects, not least of which is the high number of embryos that are lost with the use of in vitro fertilization and the side effects of this technique in the child (see HERE ). There is also the possibility that they can be used for purposes for which the ethicality is not well defined, such as gestational surrogacy, a practice in which there are objective ethical and social questions, especially as refers to the objectification of both woman and child.

There are undoubtedly many more problems that might arise in relation to biomedical breakthroughs and the assessment of their positive and negative aspects, both medical and ethical. We believe that those discussed here could be just the tip of the iceberg.