The death of His Eminence Cardinal Elio Sgreccia has been recieved with great sadness by bioethics professionals. Cardinal Sgreccia was one of the greatest representatives of personalist bioethics in recent decades, even though in this era of profound secularization, the fact of belonging to the Catholic Church and that Sgreccia held very significant responsibilities within it contributed to a tendency to marginalize his thinking. For this reason, we consider it a matter of justice to look deeper into his personage and the immense legacy of his work.

His work was based on scientific evidences and solid bioethics principles

Elio Sgreccia has the merit of being considered the “founder” of Personalist Bioethics, following the paths opened by the highest representative of modern ontological personalism, St. John Paul II, and by personalist philosophers such as Jacques Maritain, Max Scheler, Dietrich von Hildebrand and Gabriel Marcel. Personalist bioethics is based on the recognition of the human being as person. From this recognition is derived a specific treatment, respect; respect that does not depend on systemic functionality or any accidental reason that accompanies the one whom we recognize as a member of our species, but that obeys the dignity inherent to his personal condition.

For Sgreccia, the dignity of the person is not a title that can be awarded or withdrawn based on some merit, nor does it depend on the self-awareness of the individual and his own self-understanding as a holder of rights. It is, insofar as a defining and inherent quality of the “ontological structure” of the human being, something that we recognize naturally and that, consequently, enjoins us to the moral duty of respect. Hence, the personalist norm of the action is summarized thus: “Persona 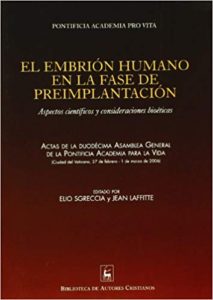 Elio Sgreccia was, in short, one of the main defenders of the theoretical-practical assimilation of the idea of personal dignity with belonging to our species, annulling the distinction established by John Locke between “human beings” in the strictly biological sense, and “persons” as legal subjects, holders of fundamental rights, an assimilation with obvious bioethical implications, beyond historical or cultural eventualities. The valuable nature of the philosophical contributions of Sgreccia for the resolution of issues as burning as organ donation, stem cell research, conscientious objection or the treatment of patients in a permanent vegetative state is therefore hardly surprising. 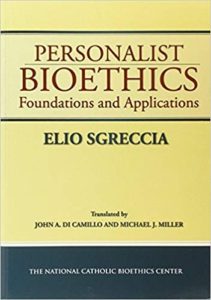 on 6 June 1928 in Arcevia (Ancona, Italy) and was ordained a priest on 29 June 1952. He studied Theology, Philosophy and Humanities, and received his Doctorate from the University of Bologna. He was appointed titular bishop of Zama Menor on 5 November 1992 and ordained by John Paul II on 6 January 1993. He was named cardinal by Benedict XVI in the consistory of 20 November 2010, of the Deaconry of Sant’Angelo in Pescheria.

His best-known work is the “”, translated into numerous languages and used as a standard text in more than 180 universities worldwide.