Our Observatory at the Catholic University of Valencia considers that the death of Vincent Lambert following the withdrawal of hydration and nutrition is an objectively euthanasic act since, although he suffered severe brain damage, he was not in a coma or terminally ill.

The French nurse, who had been in a vegetative state since 2008, died after being left for nine days without hydration and nutrition as a result of the decision taken by the French judiciary, who deemed that keeping him alive could be considered therapeutic obstinacy.

Lambert suffered a motorcycle accident and had been in a vegetative state since then. Following a fierce legal battle with his parents, who wished to continue keeping him alive, the Reims hospital withdrew nutrition and hydration and sedated him.

This was done against the will of his parents and two of his brothers, who had exhausted all legal avenues to prevent the hospital from withdrawing the care that kept him alive. However, his wife had been requesting the death of her husband for six years, claiming that this would have been his wish, although he did not leave this stated in writing in a living will.

Withdrawing life support, such as hydration or nutrition, would only be ethically valid in the case of imminent risk of death and the existence of well-proven intense suffering. However, in this specific case, we do not believe that there was such a risk, since Lambert had been in the same state since 2008 and his health did not seem to have worsened significantly in the last few weeks.

The best ethical solution to serious end-of-life health problems “is palliative care and not euthanasia: “End-of-life solutions are to treat death as a natural stage in which the sick are helped, respecting their dignity as a person, so that faced with tragic and terminal circumstances, the patient’s pain and not the patient is diminished. In this respect, the only possible ethical response is palliative care .

We would like to emphasize that the death of any human being is always dignified, because dignity is intrinsic to human nature. The goal is not to achieve a dignified death, but a painless one. 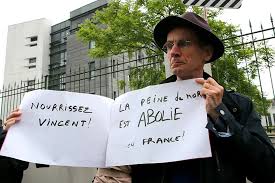 The need for public investment in palliative care

In our opinion, “what the State should address and legislate is for a majority of sick people and their families who are vociferously demanding quality palliative care. Here there is indeed a duty of the State to universalize the right and access to this care, investing financially as much as needed to make it a reality.

These efforts can only be met through the commitment of the government and the collaboration of compassionate and supportive societies with the most vulnerable, which establish multidisciplinary teams of medical professionals, nurses, psychologists, social workers and spiritual assistants.

At present, in all cases of suffering caused by physical and/or mental pain, palliative medicine has already demonstrated its efficacy to counter or at least reduce it. And palliative sedation, when medically indicated, can control intractable and refractory symptoms that are very often the cause of intense suffering.

There are other answers to the human frailty and suffering at the end of life or to an incurable disease that are more in keeping with what the dignity of patients and their families deserve, with our own self-portrayal as a progressive society committed to its weakest members. All these start with a much needed public investment in palliative care.

Statements from the Dicastery for Laity, Family and Life

Cardinal Kevin Farrell, on behalf of the Dicastery for Laity, Family and Life and the Pontifical Academy for Life, signed and issued a statement on the case.

In the statement, both institutions declared that they fully shared the affirmations https://es.zenit.org/articles/francia-mensaje-del-arzobispo-de-reims-sobre-el-caso-de-vincent-lambert/ made by the Archbishop of Reims, Monsignor Éric de Moulins-Beaufort, and his auxiliary bishop, Monsignor Bruno Feillet, in relation to the case of Vincent Lambert.

Similarly, they reiterated that the withdrawal of nutrition and hydration was “a grave violation of the dignity of the person”, and underlined that the vegetative state, while burdensome, “does not in any way compromise the dignity of those people who find themselves in this condition, nor does it compromise their fundamental rights to life and care, understood as the continuity of basic human assistance”.

They also stressed that the discontinuation of usual basic care is “a form of abandonment of the patient, based on a pitiless judgment of the quality of life, expression of a throwaway culture that selects the most fragile and helpless people, without recognizing their uniqueness and immense value”.

Finally, they stated their desire to find “effective solutions” that would preserve Vincent Lambert’s life and assured the prayer of the Holy Father and all the Church so that this would happen.

Our Observatory shares Cardinal Farrell’s assessment on this case.

Pope Francis: “Let us not build a civilization that discards persons”

Pope Francis has lamented the death of the French nurse, saying in his Twitter account: “May God the Father welcome Vincent Lambert in His arms”. “Let us not build a civilization that discards those persons whose lives we no longer consider to be worthy of living: every life is valuable, always”, the Pontiff has exhorted.