On 10 June this year, the Congregation for Catholic Education published a document entitled “Male and Female He Created Them” ( read HERE entire document), which sets out the Congregation’s thoughts on Gender Ideology, and especially how this information can be conveyed to the world of education. As the Congregation says, the aim of the Document is “to offer […] some reflections which, it is hoped, can guide and support those who work in the education of young people, so as to help them address in a methodological way (and in the light of the universal vocation to love of the human person) the most debated questions around human sexuality”.

Given the length of the Document — some 57 points — we at the Bioethics Observatory at the Catholic University of Valencia have written a summary of the text that, without altering the content of the original document, may make it easier to read.

As in the original document, this text is structured into sections and we have maintained the same section titles. 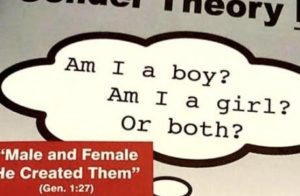 There is no doubt that parents and educators are facing a real educational crisis in everything that concerns affectivity and sexuality, since in many cases, educational paths have been proposed that “convey a neutral conception of the person and of life, yet in fact reflect an anthropology opposed to faith and to right reason”, creating a profound “disorientation regarding anthropology” in parents and educators with respect to these issues.

Both groups face the challenge posed by Gender Ideology, which essentially denies the sexual difference between men and women, since it considers that sex is not defined genetically, that is, at birth, but is constructed according to individual desires. I am male or female, because it is what I feel and what I want to be. This undermines the anthropological basis of the family, by drastically separating the biological diversity and complementarity between men and women.

This issue cannot be assessed outside of education in the call to love, as defined in the Second Vatican Council, which specifies that sex education should be “in keeping with their ultimate goal, their ability, their sex”, while conforming to Christian culture.

Consequently, the Congregation for Catholic Education, within its competencies, offers this document to guide and support those who work in the education of young people.

The document refers, first, to how the concept of Gender has evolved in the twentieth century, which is fundamentally “based on a reading of sexual differentiation that was strictly sociological, relying on a strong emphasis on the freedom of the individual”; it stressed that “sexual identity was more a social construct than a given natural or biological fact”, saying in that sense that “the only thing that matters in personal relationships is the affection between the individuals involved, irrespective of sexual difference or procreation which would be seen as irrelevant in the formation of families”.

Although the concept of Gender Ideology undoubtedly differs substantially from what a proper Christian anthropology espouses in sexual differentiation, there are also some points of agreement, such as “to combat all expressions of unjust discrimination” between individuals, and “to respect every person in their particularity and difference, so that no-one should suffer bullying, violence, insults or unjust discrimination”.

Another possibly positive point is to increase the anthropological understanding of the values of femininity that are somehow defended in this Ideology.

Nevertheless, there are numerous points of criticism between Gender Ideology and a proper Christian anthropology, as Gender theories encourage “a gradual process of denaturalisation, that is a move away from nature” as regards sex. Accordingly, sexual identity, and even the family, must be reconsidered in accordance with what has come to be called post-modern “liquidity” and “fluidity”.

Moreover, gender ideology proposes a dualistic anthropology, which gives rise to “relativism, in which everything that exists is of equal value and at the same time undifferentiated, without any real order or purpose”, thus emptying of meaning the Christian anthropology regarding people’s sex and the family.

All this “inspires educational programmes and legislative trends” that radically affect “the biological difference between male and female”, “as if there were no truths, values and principles to provide guidance, and everything were possible and permissible”.

“There are rational arguments to support the centrality of the body as an integrating element of personal identity and family relationships”. “The body is subjectivity that communicates identity of being”, since sexual dimorphism, that is, the sexual difference between men and women, is founded on experimental and human sciences.

As a result, “the process of identifying sexual identity is made more difficult by the fictitious construct known as ‘gender neuter’ or ‘third gender’”, which obscures sexuality as a differentiating factor of the male or female identity.

“It is clear that if we are to provide well-structured educational programmes that are coherent with the true nature of human persons, it is not possible to achieve this without a clear and convincing anthropology that gives a meaningful foundation to sexuality and affectivity”, since this anthropology, the Christian one, argues that “man too has a nature that he must respect and that he cannot manipulate at will”, respect that is based on the “respect for our dignity as human beings” and on “the moral law, which is inscribed into our nature”. This Christian anthropology has its roots in the narrative of human origins, as described in the Book of Genesis, where it says that “God created man in his own image […] male and female he created them” (Genesis 1, 27).

According to the document by the Congregation for Catholic Education, “[t]he family is the natural place for the relationship of reciprocity and communion between man and woman to find its fullest realisation”. The family is “an anthropological fact and consequently a social, cultural fact”, that is, “a natural social unit which favours the maximum realisation of the reciprocity and complementarity between men and women”, and “precedes even the socio-political order of the State”.

Based on this anthropological rationale, two rights emerge: “Firstly, the family’s right to be recognised as the primary pedagogical environment for the educational formation of children” which underlies the rights of parents to educate their children; and second, the right of the child to “grow up in a family with a father and mother capable of creating a suitable environment for the child’s development and emotional maturity”.

Likewise, Christian educators must “offer witness to […] the truth about the human person”. “Education in affectivity requires language that is appropriate as well as measured. It must above all take into account that […] children and young people have not yet reached full maturity”, so that teaching on sexuality should be age-appropriate.

There is no doubt that today’s society is imbued with the priority of personal freedom, which determines that “the flag of [that] freedom” is brandished as a fundamental aim of sex education.

For these reasons, “the family must not be left to face the challenges of educating the young on its own”, and must be supported by an “educational alliance between family, school and society”, promoting a substantial and non-bureaucratic interaction that harmonises the primary responsibilities of parents with the work of teachers in the education of children and adolescents, taking into account that his alliance “should be informed by the principle of subsidiarity”.

Within this educational process, the continuing education of formators (educators) is essential, and should include not only specific personal aspects, but also cultural and spiritual aspects that may affect the students’ education: “educators are expected to be able ‘to accompany their students towards lofty and challenging goals […] involve and connect students to each other and the world’”.

One important aspect is the personal example of the educators, since “modern man listens more willingly to witnesses than to teachers, and if he does listen to teachers, it is because they are witnesses”.

Apart from this general reflection, and strictly in relation to Gender Ideology, “Catholic educators need to be sufficiently prepared regarding the intricacies of the various questions that gender theory brings up and be fully informed about both current and proposed legislation in their respective jurisdictions, aided by persons who are qualified in this area, in a way that is balanced and dialogue-orientated”, and well founded on confirmed scientific principles.

The document concludes by saying that “the path of dialogue […] appears the most effective way towards a positive transformation of concerns and misunderstandings”, for the further development of the human being.

“Catholic educators are called to go beyond all ideological reductionism […] to transform positively the challenges of their times into opportunities by following the path of listening, reasoning and proposing the Christian vision”. “Formators have the attractive educational mission to ‘teach them sensitivity to different expressions of love, mutual concern and care, loving respect and deeply meaningful communication’”.

This “culture of dialogue does not in any way contradict the legitimate aspirations of Catholic schools to maintain their own vision of human sexuality, in keeping with the right of families to freely base the education of their children upon an integral anthropology, capable of harmonizing the human person’s physical, psychic and spiritual identity”.

“The Congregation [for Catholic Education] wishes to encourage them in their pursuit of the work of forming young people, especially those among them who are affected by any form of poverty, and those in need of the love shown them by their educators”.

There is no doubt that Gender Ideology is objectively influencing social thought, steering it towards positions opposed to what could be described as proper Christian anthropology, which profoundly affects people and families.

The assessments that are made — generally from ideological power groups — are not always in accordance with Christian thought, so we welcome the publication of the document “Male and Female He Created Them. Towards a Path of Dialogue on the Question of Gender Theory in Education” by the Congregation for Catholic Education, which explicitly sets out what should be considered as the doctrine of the Catholic Church concerning this controversial subject. Despite the clear and well-founded statement, prestigious people misunderstand the Church’s thinking on the subject (read HERE).

Many Catholics will find in this Document a source of clear ideas to continue forming our conscience on such a controversial issue, with the assurance that we will walk the path shown to us by our mother the Church.

Moreover, Gender Ideology directly affects the education of our children, so a document to provide guidance for parents on what to do in regard to this delicate issue is an invaluable instrument to know how to proceed in the sacred duty that we have to educate our children in the Faith.

In our opinion, the Document by the Congregation for Catholic Education is, at this point in time, an unquestionably useful text to guide Catholic parents in the education of their children.