Skip to content
Home/Bioethics, BIOETHICS NEWS, NEWS and VIEWS/Washington State is the first to legalize human composting as an alternative to a traditional burial or cremation

Cremation, burial or compost. In the state of Washington in the United States, it is already possible to choose between these three options upon death. Whoever wishes can become compost for gardens and crops instead of being cremated or buried in a coffin. An article in Business Insider said that, “Washington State Gov. Jay Inslee, who is running for president in the crowded 2020 Democratic field, signed SB 5001 “concerning human remains,” — making Washington State the first in the country to legalize human composting as an alternative to a traditional burial or cremation. 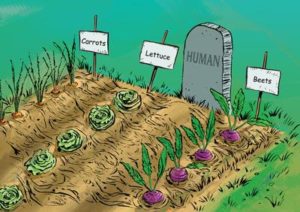 Under the law, which is slated to take effect May 1, 2020, human remains can be disposed of through “natural organic reduction” or through alkaline hydrolysis, known as liquid cremation, which uses a chemical process including water, alkaline chemicals, and heat to reduce human remains to bone fragments. (Business Insider Hilary Brueck May 25, 2019):”

While the idea seems crazy, it is gaining fans in the US, especially among the most environmentally-aware groups, as an ecological way of making use of human corpses. They prefer to form part of the foundations of a flowering garden at the gates of a house or to feed the roots of trees, instead of decomposing in a coffin underground or becoming ashes.

The greatest advocate of this new law is Katrina Spade, driving force behind the “Urban Death Project” and founder of the company “Recompose”, based in Seattle. There, they guarantee that a corpse can become fertilizer in only 30 days, using measures to accelerate the natural decomposition process.

Their method consists of following the traditional composting process, which involves breaking down the organic matter with microorganisms until it becomes compost. To enhance the decomposition, they add a mixture of wood chips and other biodegradable materials, so that microbes and bacteria do their work faster and accelerate the decomposition. The whole process takes place at around 55°C, to prevent the transmission of infectious diseases, say the supporters of the technique.

Today, this alternative to burial or cremation is illegal or unregulated in many countries, where depositing human remains outside cemeteries or areas marked for burial is banned. The promoter of the “Urban Death Project” believes that the conversion of cadavers into compost could also put an end to areas destined for burials, to promote other uses.

From our point of view, this is yet another practice contrary to the dignity and respect that the human body deserves.

Read about another iniciative to preserve human remains