Skip to content
Home/Bioethics, BIOETHICS NEWS, Medical Deontology, NEWS and VIEWS/“Saybie” is the smallest of the small healthy preterm baby born. A new paradigm is needed for premature babies

“Saybie” is the smallest of the small healthy preterm baby born. A new paradigm is needed for premature babies

Five months ago, little Saybie was born. She weighed 245 grams. Not even a quarter of a kilo. She measured 23 cm from head to toe. Her life expectancy was almost zero. But she won the game. Never before had such a fragile baby survived!

Saybie was born by cesarean section at 23 weeks of pregnancy, as her mother had a serious medical complication. When these babies are born at less than 28 weeks, doctors call them “micro-preemies”.  Saybie was born in December and since then the care had been extremely high and the hope little. Hospital staff did not give her parents false expectations. In fact, it was her caregivers in the Intensive Care Unit who gave her her nickname, using a play on words: Say-Bye, say goodbye.

But the child, the tiniest surviving human ever born, according to the University of Iowa records, did not say goodbye. She grew, gained weight and survives. The little girl was discharged weighing 2 kg and 260 g, almost nine times her weight when she was born and measured 40 cm, double what she measured at birth (BBC, 09/30/2019). 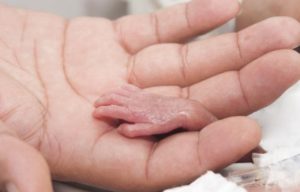 Our Observatory has been following the survival rate of extremely premature babies to confirm whether this improvement in survival is due to new medical advances or if they are rare cases. The previous record we published was held by a baby girl from Germany, who was born weighing 252 g (8.9 oz) in 2015, according to the University of Iowa, and earlier this year a baby weighing only 268 g (9.45 oz) was born in Japan. The child is believed to be the smallest premature baby boy to have been successfully treated. Read HERE.

The following text is from a recent JAMA study: “Survival rates of extremely preterm infants have improved by leaps and bounds since the 1980s, with US and Swedish studies published providing new data on the trend.

Doctors previously estimated that the earliest gestational age at which a baby could be considered viable outside the womb was 28 weeks when he weighs about 2.2 pounds (one kilogram), about 12 weeks short of the 40-week length of a normal pregnancy. Babies are considered premature if they are born before the 37th week of gestation.

Facing facts: “data shows that babies delivered at 24, 23 or even 22 weeks (measured from their mothers’ last menstruation) are able to survive, even as they weigh 1.1 pounds or less”

Do our hospitals have the means to properly treat “micro-preemies” in order to obtain the best results? In this sense, Sweden holds the world record for earliest neonatal viability (Karolinska Instiutet, March, 26/9/2019):

In this respect, we reiterate our previous bioethical statement on this matter, “The new possibilities for survival in extremely preterm infants—who are surviving in ever-increasing proportions, are more premature at birth and have fewer sequelae—make it necessary to review the protocols for medical care in babies born at 24 weeks of gestation or earlier, who are neglected today in many cases” (Read HERE).