A new step to verifying when human biological life begins

Current scientific evidence allows affirming that “an intact human embryo is created [I would say more like ‘produced’] by the fertilization of an egg by a sperm cell and by the resulting formation of embryonic and embryo-surrounding cell lineages, which these sac-like structures are not.”

Determining when human biological life begins remains a scientific and bioethical issue of the first order. Nonetheless, so too is determining what happens in the early life of the human embryo, its subsequent development until implantation in the uterine endometrium and its evolution until it becomes a fetus, very important aspects of which are still unknown.

Defining the human nature of that incipient living being has considerable bioethical implications (read HERE and HERE), related not only to the manipulation or destruction of these human beings in their early life stages for experimental purposes but also to their production in the laboratory, especially for use in in vitro fertilization and different social purposes, not least of which is surrogacy (read HERE).

In our Observatory, we have repeatedly discussed the point at which human life begins biologically (see HERE), and have done so particularly in a chapter in a recent book, untitled Conception: An Icon of the Beginning, on the subject.

Nature article that we are now discussing

On 11 September last year, though, an interesting article was published in Nature (read HERE) that essentially reports the experiments published in another article in Nature, in which Yi Zheng and colleagues from the University of Michigan describe how an experimental model of human embryonic tissue implants in the uterine endometrium, reproducing “many of the key events that happen around the time of implantation (that is, during the peri-implantation stage)” (read HERE). There is no doubt that a better understanding of all stages of human embryonic development is biologically very important, but it is also important from a bioethical point of view. As a result of the publication of the famous Warnock report — which lacks any biological foundation — it was determined that human life begins when the embryo implants in its mother, at approximately day 14 of its life. Consequently, a red line was drawn, before which the embryo could be manipulated without any bioethical implications. Since it was defined in the report as a “pre-embryo”, it could not be regarded as an individual of the human species, and thus could be destroyed without any negative ethical consequences (read This term is no longer used in current discussions regarding the nature of the embryo). 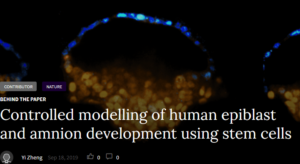 Article in Nature by Yi Zheng

In this regard, it should be noted that those first 14 days of life of the human embryo is the stage at which the human being experiences the most attacks (Read HERE and HERE). Because indeed it is in those early days in which human embryos are most frequently used as research material; it is when those leftover from in vitro fertilization are frozen (read our report HERE), leading to a great loss of human life; it is where human-animal hybridization experiments are focused, many aimed at the production of artificial organs for transplantation; it is where everything to do with the production of human embryos by cloning or other related systems is being developed (observatory link); and ultimately, it is also where other techniques are used, which if they do not destroy human embryos, they at least manipulate them in a way absolutely incompatible with their intrinsic dignity (observatory link).

But coming back to the Nature article that we are now discussing, let’s look at what it says in the context of implantation of the embryo in the endometrium.

In a pre-implantation stage, the yolk sac (which will later become the amniotic sac) develops in the human embryo, and inside it, a disc of cells forms, the epiblast. Gastrulation then begins, i.e. the process by which the epiblast gives rise to the three germ layers — the ectoderm, mesoderm and endoderm — from which the tissues of the fetus are formed.

In the experimental model developed by Zheng et al., synthetic structures resembling the human embryonic sac are generated, revealing “cell differentiation events in the embryo around the time of implantation.”

As the authors say, “crucially, this model does not involve the use of intact human embryos or an in vitro attachment system for human embryos”.

Within the technical process, an important bioethical aspect is to determine how the pluripotent cells are produced from which the embryonic synthetic structures will be generated. These can be derived from human embryonic stem cells (hESCs) or by reprogramming human adult cells, which differentiate until induced pluripotent cells (or IPS cells) are produced.

Both cell types are molecularly equivalent to those of the early-stage embryo before it reaches gastrulation. That is, they are similar to hESCs, which can be obtained after the zygote divides into two pluripotent cells.

In the laboratory, both types of pluripotent cells — hESCs and IPS cells — if allowed to spontaneously differentiate, generate disorganized cell aggregates, called embryoid bodies; however, if differentiation is directed using specific culture and growth factors, the production of cells of all tissue types or even simplified 3D models of fetal organs or specific germ layers can be achieved.

When adult cells are obtained from patients with specific diseases, cell models of these diseases can be developed in the culture dishes (“disease in a dish” modeling). These cell dishes are invaluable for deepening the molecular knowledge of the diseases evaluated, and for experimentation with drugs to combat them.

In relation to the formation of the germ layers obtained by this experimental model, however, it should be noted that this formation occurs in a disorderly manner, not at all like the spatial organization with which human embryos differentiate during implantation. Therefore, according to the author Zheng’s article in Nature, “such models have not been very helpful for studying the peri-implantation stage of human pregnancy.”

Assessing the technical aspects of the experiments by Zheng and colleagues that have led them to create embryonic sac-like structures is not what we are most interested in here. Essentially what the authors have done is to develop a device consisting of three channels through which products necessary to create sac-like structures can be introduced, such as matrix material, hESCs or IPS cells, and morphogen-containing fluids. This has allowed them to generate cavities, in which the stem cells can proliferate and differentiate; thus, after 36 hours, they become organoid structures reminiscent of the embryonic sac, with the characteristics of the anterior and posterior ends of the human embryo. In the posterized sacs, the authors observed cell populations that resembled a developing amniotic membrane, a posterior primitive streak, mesoderm-like cells, and “remarkably, primordial germ cell-like cells”. By contrast, in the aforementioned sack, the authors observed anterior primitive streak-like cells and endoderm-like cells.

As the author of the article, Amander T. Clark, says, “this is one of the first humanized models that can enable the study of the awesome complexity of spatial relationships between cells in the peri-implantation window of development.”

Clark wonders though, “whether these embryonic-like sacs are, in fact, human embryos?” In his opinion, they are not, since they cannot form viable embryos (they cannot develop into a normal fetus), nor do they have the necessary elements for the formation of the placenta and further membranes that surround the embryo.

Nevertheless, art from these biological considerations, the experiments by Zheng and colleagues allow us to again raise the essentially ethical question, formulated at the beginning of this report, i.e. the question of whether human life begins with the formation of the zygote or at 14 days with the implantation of the embryo in the placenta. Clark believes, as of course do we (Embryo biological status) that, “an intact human embryo is created [I would say more like ‘produced’] by the fertilization of an egg by a sperm cell and by the resulting formation of embryonic and embryo-surrounding cell lineages, which these sac-like structures are not.” Nevertheless, although obtained by means other than the fertilization of gametes, the embryoids produced could be refined to produce real human embryonic tissues following an organized development program, which would mean that by a precautionary principle, they should be considered as human embryos, with the ethical implications that this entails. Moreover, the claim that human life begins at day 14 of the embryo’s life when it implants in the uterus, is an arbitrary claim with no scientific foundation, proposed, as has already been mentioned, to be able to manipulate and even destroy human embryos before that time, with no ethical or moral responsibilities. This is confirmed with Zheng’s experiments discussed herein, as they conclude, albeit not decisively, that the development of the human embryo from the formation of the zygote is a continuum. This in no way conditions the fact of its implantation, much less than the 14-day red line — arbitrarily imposed by the Warnock Report — is what determines when human life begins.

The biological status of the human embryo from fecundation. Scientific approach