New systematic review on the abortive effect of IUD devices

An extensive systematic review published recently assesses the current scientific evidence on the potential for pregnancy and subsequent embryo loss in women who use intrauterine devices – IUD -as a contraceptive method, to analyze the post-fertilization action mechanisms responsible for embryo losses caused by IUD.

The authors evaluated studies that used human chorionic gonadotropin (hCG), early pregnancy factor (EPF), direct observation of embryos in fallopian tubes, or determination of pregnancy-specific binding globulin (PSBG) as markers of pregnancy. The hCG studies were subjected to quality assessment based on the U.S. Preventive Services Task Force quality tool. The bias of studies that assessed pregnancy in other ways was analyzed study by study. In total, 1,073 studies were identified and 138 were read in detail. 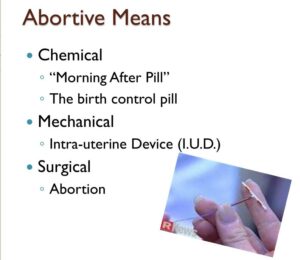 Twenty-three studies of β-hCG, 4 studies of direct observation of embryos in fallopian tubes, 2 studies of PSBG, and 1 study of EPF (heat shock protein 10 [Hsp10] or chaperonin 10) were analyzed. In all the studies considered together, 7.3% of IUD users had evidence of fertilization and pregnancy failure. In studies considered as good quality, 4.5% showed evidence of fertilization and pregnancy failure.

Although no randomized trials of embryo formation and loss have been published in IUD users compared to controls with no contraception, the authors considered that, although β-hCG studies span a broad spectrum of quality, there are several good-quality studies supporting embryo formation and loss in these women. Evidence of embryos found in the fallopian tubes was moderate, while evidence of the detection of PSBG and Hsp10 as markers of early pregnancy was limited. Nevertheless, they are indicators of the existence of a post-fertilization effect of IUDs. Thus, there would be fertilization and embryo formation in many cases, but the device would interfere in the uterine implantation process, causing its loss, namely by acting by an abortive mechanism in the strict sense of the word.

It should be noted that the conclusions of several of the studies analyzed tended to minimize evidence of embryo formation and subsequent loss related to the IUD. To better assess the rate of embryo loss in IUD users compared to non-users, future research should include well-designed prospective trials and less subjective assessments of the existence of embryos in fallopian tubes as a method of early pregnancy detection.

This review also revealed that the papers studied had tried to conceal or minimize the post-fertilization mechanism of action of IUDs, related to their anti-implantation effect.

For example, the European Society for Human Reproduction and Embryology (ESHRE) workshop group concluded the following:

“…if it was conclusively shown that the sole or principal mode of action was to prevent the embryo from implanting, then this method, as in the case with emergency contraception, would be considered by the Roman Catholic church as causing an early abortion. As a result many agencies involved in the research, development or delivery of contraception prefer to leave the action mechanism issue unresolved, which may explain why research into the contraceptive action mechanisms of IUDs has been sparse in the last 20 years.”

In the same document, the authors reach the conclusion:

“There is sufficient evidence to suggest that IUDs can prevent and disrupt implantation. The extent to which this interference contributes to its contraceptive action is unknown. The data are scanty and the political consequences of resolving this issue interfere with comprehensive research.”

The American College of Obstetrics and Gynecology, Planned Parenthood, and other leaders in women’s healthcare have similarly opted to overlook the post-fertilization or abortive effects, by continuing to use terms such as “fertilized egg” instead of the embryologically correct term “zygote” or “embryo”, or by prioritizing changes in cervical mucus as a mechanism of action of IUDs, when this mechanism has been much less studied than post-fertilization mechanisms.

The authors of the present study regret that ideological motivation has been imposed on scientific criteria, highlighting the importance of integrity in research, language use and information to potential users. It is a violation of informed consent and women’s autonomy to conceal information relevant to the ethical acceptability of the use of these devices.