Along with the objective, medical and ethical problems posed by euthanasia and assisted suicide, no less controversial are, those that arise in relation to language engineering [the semantic manipulation of the terminology] used around them.

In our view, however, two groups should be distinguished in that manipulation:

The former include mainly certain political groups, organizations of various types and associations whose activity is directly aimed at promoting the legalization of euthanasia and assisted suicide. 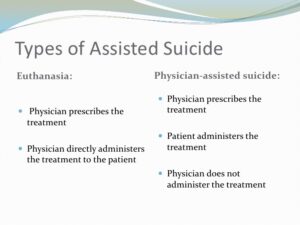 Why do they want to remove the use of euthanasia and assisted suicide using language engineering?

In order to try to revise their objectives, the first hurdle they need to remove is the use of the terms “euthanasia” and “assisted suicide”, replacing them with others created by language engineering such as “death with dignity”, “medically assisted dying”, “medical aid in dying” or “physician-assisted suicide”.

Thus, when one of the above-mentioned terms appears in the specialized literature or in draft laws proposed in an attempt to legalize euthanasia practices, we must be fully aware that these terms are always referring—albeit surreptitiously—to euthanasia and assisted suicide, so the moral and ethical assessment of such acts should be one that corresponds to both practices.

With more philosophical and ethical substance, however, is the issue of those who try to differentiate MAD from any other type of suicide, for in their view it is ethically and morally acceptable, as opposed to suicide, which never is.

In this regard, ample reference is made in an article published in the January-February 2020 issue of the Hastings Center Report, authored by Phoebe Friesen (read HERE), which primarily aims to discuss the similarities and differences between both practices: medically assisted dying and suicide.

Proponents of MAD consider that when it is applied, the patient is immersed in what they call a process of death brought about by their underlying disease. Thus, the only thing that MAD does is to hasten its inevitable arrival, i.e., the primary aim is not to end the life of that patient, but to find a dignified exit from this world for them by trying to shorten their agony. It is not MAD that ends the patient’s life, but their incurable, underlying disease.

In the paper, Friesen analyzes four reasons commonly given for holding that there are fundamental differences between MAD and suicide:

Friesen, therefore, states that both practices are ethically and morally different according to the four reasons outlined above.

Our statement on the differences between MAD and suicide

In our view, though, MAD is a practice directly aimed at ending the life of a seriously ill patient who suffers pain or disorders of any kind that are difficult to endure. In other words, it is a clearly euthanasia practice. We shall try to substantiate this assertion.

In effect, when a patient is in the conditions required to apply MAD, four solutions can be offered:

The first two are, in our view, morally and ethically licit; the remainder, however, are clearly illicit.

The first solution is undoubtedly the right one if what is sought is to improve the patient’s living conditions, and what he wants is a relief of any kind of pain or suffering. On the other hand, if what he wants is to end his life, palliative care cannot usually achieve that end. If palliative care is partially-wholly ineffective, and the pain and suffering persist, palliative sedation can be used, which virtually reduces or eliminates all types of pain.

Palliative sedation can certainly shorten the patient’s life, but this is morally acceptable because its direct objective is not to end his life, but to improve his condition of suffering. This is a clear example of “double effect” actions, in which what is sought is a good end, although indirectly, an unwanted bad side-effect must be accepted. Obviously, double effect actions, to be morally licit, must also meet a number of requirements that we cannot elaborate on here. That is, what fundamentally determines the morality or not of these actions is their intentionality, the end they pursue, and in palliative sedation, their objective is clearly good: to remove unbearable pain or suffering.

Another matter is terminal sedation in which, in view of the fact that the patient’s pain cannot be eliminated, wholly or in part, they are sedated until the end of their life. In this case, the aim is obviously to end the patient’s life, so as to end their pain as well, which, in our opinion, is clearly illicit from a moral and ethical point of view.

Finally, when the patient is given the necessary instruments so that he can end his life, we are faced with assisted suicide, and when it is a health professional who directly administers the lethal substance to the patient, euthanasia is incurred.

Certainly, these last two actions are morally and ethically illicit, although the moral judgment they merit is different, because euthanasia is further compounded by directly involving a third party, in this case, the doctor or healthcare personnel who participate in the practice.

In view of the above, in order to morally judge MAD, the end pursued by that act must be objectively assessed. If what is intended is to medically help a patient to die, as the very definition of MAD seems to indicate, there is no doubt that, regardless of all the reasoning put forward to justify it, it is a morally and ethically illicit practice.

In short, when assessing the morality of MAD we should not theoretically judge what it means, but what is achieved with it and with what intent it is practiced. In our opinion, MAD is always used to hasten the death of a suffering patient. And whenever this is the case, the judgment it merits is morally and ethically negative (read HERE Hasting Centre Rep. 2020 Jan;50(1):32-43. doi: 10.1002/hast.1083).