An article published recently in The Lancet Global Health (June 1, 2020) and the University of Oxford – News looked at the risk of smoking in a large study conducted in Cuba. Evidence has shown that smoking causes about 100,000 deaths per week worldwide, more than coronavirus is now causing.

UK and US researchers from the Nuffield Department of Population Health at Oxford University, together with Cuban researchers from the National Institute of Cardiology in Havana, investigated the association between smoking habits, focusing on the age when smokers started, and cause-specific premature mortality in a large cohort of adults in Cuba that included 120,000 men and women aged 30-70 in five Cuban provinces. 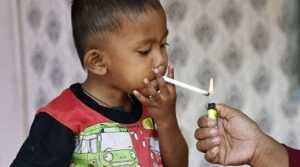 Added-value of this study. Smoking before age

The habit of smoke in childhood is more frequent that is thought, including 10 years old smokers

“Starting in childhood approximately doubled the rate of premature death […]. About half of participants who start smoking before age 15 years and do not stop will eventually die of complications from their habit. The greatest risks were found among adults who began smoking before age 10 years.”

Re–examine anti-smoking campaigns giving special priority to the group most at risk appears to be an urgent issue. An apparently cultural issue that is difficult to combat with legal prohibitions.