Analyses of the behavioral differences between men and women have led many researchers to try to establish similarities in the brain structure that might explain this variability in behavior. These demonstrable differences in anatomical and physiological structures are compounded by new discoveries on sex-linked genetic variations which, far from being limited to the sex chromosomes, currently extend to around 6500 genes.(1) What effect might this genetic variability have on the structure and functioning of our brains and, consequently, on our behavior? Trying to determine this versus the environmental influence — surroundings, education, culture — is today the subject of extensive study.

For decades, scientists have analyzed the brains of both sexes in an attempt to define different traits that might explain this variability. The simple observation of anatomical differences was, until recently, the only evidence to ascertain the causes of sex-differentiated behavior. However, new neuroimaging techniques, which provide valuable information on the functioning of our brain beyond its structure, and even the way in which the neural networks that form it are connected, are bringing a new perspective to explain the bases of these differences.

Several working groups have presented results (not always concurring), the most noteworthy of which we shall analyze in this report.

Several studies have shown structural differences in numerous brain nuclei in large areas, both cortical and sub-cortical, as described in the first meta-analysis conducted on this subject, which includes data obtained between 1990 and 2013.(2) The analysis shows that there are regional sex differences in male and female brains, in terms of volume and tissue density, in the amygdala, hippocampus and insula, areas that are known to be implicated in sex-related neuropsychiatric conditions. Together, these results suggest the existence of candidate regions for investigating the asymmetric effect of sex on the developing brain, and for understanding sex-biased neurological and psychiatric conditions.

In relation thereto, Eric M Prager, in an Editorial in the “Journal of Neuroscience Research”, says that, “sex plays a role, not only at macroscopic level, where it has been found that the brains of men and women differ not only in size but also at microscopic level”.(3) Similarly, in another study published in the same journal, the authors highlighted the sexual differences in the brain at all levels, from genetic and epigenetic differences to synaptic, cellular and system differences, differences that are maintained throughout life.(4) Accordingly, these and other authors claim that taking the sex into account is important when interpreting the results obtained in scientific and medical research and that this will need to be evaluated in any clinical studies conducted,(4)(5) a recommendation endorsed by the United States National Institutes of Health – NIH (see HERE). (6) 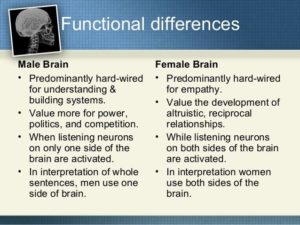 This neurological diversity implies significant differences in brain functioning related to sex, which can be summarised as follows: 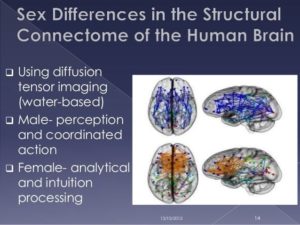 Although it is a widely debated issue, recent studies using new technologies to reveal the configuration of the brain “connectome” have empirically confirmed what experience had sensed: male and female behaviors present evident differences in some traits, which may be related — as well as to the effect of the environment, culture and education — to the brain connectome, also different, in part due to sex-linked genetic programming and the hormone regulation that conditions it (11).

The differences in the way in which the neural networks are connected are evident and well proven by the most recent studies.

Thus, in addition to the morphological differences described above, the differences in the way in which the neural networks are connected are evident and well proven by the most recent studies. As mentioned, the effect of male and female hormones, which reach very different concentrations in the brain of both sexes, seems to be behind these variations.(12) Some facts and evidence on these are discussed below.

Male and female brains are connected in different ways

Recent studies show that male and female brain connectivity differs. In one study that analyzed 949 young people aged between 8-22 years (428 males and 521 females), objective sex differences were found in the brain connectivity, which are consolidated during development and which manifest mainly in adolescence and in adulthood; these consist primarily in that intra-hemispheric connectivity is optimized in the male brain and inter-hemispheric connectivity in the female brain. (13) This different form of interconnection between neural networks facilitates the coordinated connection between perception and coordinated action in males, and between analytical and intuitive processing in females.

The same study also found that the participation coefficient (PC) of each individual regional node of the structural connectome of the brain presents statistically significant differences in male and female brains. The PC of the different regions analyzed is higher in large cortical regions of the female brain and is greater in the cerebellum in the case of the male brain.

Another subsequent study that used a methodology similar to the aforementioned one confirmed these findings.(14) That study included 491 females and 409 males with mean age 15 years: sex-related differences were detected in the connectivity of the sub-networks, which were defined based on structural characteristics, functional systems and finally behavioral domains. When the sub-networks were identified as structurally cohesive communities, the authors observed more inter-hemispheric connections in females and increased intra-hemispheric connections in males, in line with that found in the aforementioned study by Ingalhalikar.(13)

The greater inter-hemispheric connectivity in females would facilitate the integration of the analytical and sequential reasoning modes in the left hemisphere, situating spatial and intuitive processing of information in the right hemisphere. This translates into better attention, verbalization, facial memory and social cognition.

The greater intra-hemispheric connectivity, combined with greater connectivity with the cerebellum, confers males with a more efficient system for motor coordination, spatial processing and motor and sensorimotor speed. (14) 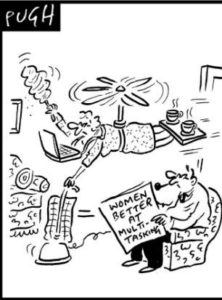 The controversy begins. Are our brains typically male or typically female?

Despite the evidence presented so far, there are researchers who maintain that it is not possible to assign significant differences between male and female brains and that both should be understood as a cluster of regions that would interchangeably show male and female aptitudes in the sense that they have been noted. In other words, that although there are sex differences in the brain and behavior, humans and human brains would be composed of “mosaics” of unique characteristics, some more common in women than in men, some more common in men than in women, and some common in both women and men, so human brains cannot be classified into two different classes, male and female.(15) This paper was widely covered and discussed in the September 2017 issue of “Scientific American”, in which journalist Lydia Denworth highlights the conclusions of Joel, its author, whereby “the brains of men and women…are not distinct populations”.(16) With reference to this, it is notable that when the journalist refers to one of the articles cited in that paper,(13) which contradicts Joel’s theories, despite classifying it as a high impact study, she pours criticism over it that is difficult to accept scientifically, such as the claim that the study has been “labelled neurosexism” and has been accused of “playing to stereotypes”, comments with no bibliographical argument or foundation. Nor does she present scientific evidence that calls into question the conclusions of the aforementioned article, except for a comment that a weak point of the study is that it “did not correct for brain size”, of which similarly she cites neither source nor author; rather, it appears more opinion of the journalist herself, who perhaps applies here the same criticism that she herself used previously in the assessment of the mean size of the brains of both sexes, which would not be such if corrected for the weight of the individuals. However, given that what the study by Ingalhalikar (13) measures is the PC of each individual regional node of the structural connectome of the brain, it seems risky, if not unfounded, to say that this parameter is dependent on brain size.

In addition to all this, a later article, published like Joel’s in PNAS, and which is not mentioned by Denworth in the aforementioned issue of Scientific American, claims that, according to the empirical evidence and multivariate analysis of the data processed by Joel’s team, who analyzed differences related with a single variable,(15) the conclusions of that paper, in stating that, “… human brains do not belong to one of two distinct categories: male brain/female brain”, or that “…brains do not fall into two classes, one typical of males and the other typical of females…”, is not verifiable.(17) They base their statement on the fact that, by applying correct statistical treatment to Joel’s data,(15) which includes performing a simple multivariate analysis, the results suggest completely the opposite: brains are typically male or typically female. That is to say, having analyzed in their entirety the differences that Joel compared in isolation, the results show evidence of the existence of sex-linked brain dimorphism.(17)

As Denworth paradoxically acknowledges, even though she tries to invalidate sex-linked brain dimorphism in her article, “Joel, for her part, agrees that genetics, hormones and environment do create sex differences in the brain. She even agrees that given enough information about specific features in any one brain, it is possible to guess, with a high degree of accuracy, whether that brain belongs to a female or a male”.(16)

These differences, which also apply to our brains, define whether an individual is male or female with a very little margin of error.

Sexual dimorphism, unequivocally demonstrable in multiple facets of the bodies of men and women, affects their anatomy, physiology, metabolism and immune, endocrine and nervous systems. It is true, as Joel says (15), that the different characteristics associated with masculinity and femininity do not occur in the same proportion in the individuals of each sex, with a gradation of these characteristics appearing that mean that no two women or two men are alike. Nevertheless, analyzed in their entirety, these differences, which also apply to our brains, define whether an individual is male or female with a very little margin of error. Disorders of sex development (DSD) do not constitute another alternative to sexual dimorphism, but rather an exception to the general rule of binary sex differentiation is generally linked to genetic abnormalities. The reason for this male-female duality lies in the need for complementarity which, from the differences in each of the two sexes, has provided so many benefits to the evolution of the species and its genetic enhancement, as well as constituting one of the engines that thrust the human being into the relationship and gift linked to sexuality.