A recent article published in The New York Times (July 15, 2020) with the title “In Shadow of Pandemic, U.S. Drug Overdose Deaths Resurge to Record” approaches the issue in the current pandemic crisis. The authors say “Nearly 72,000 Americans died from drug overdoses last year, according to preliminary data 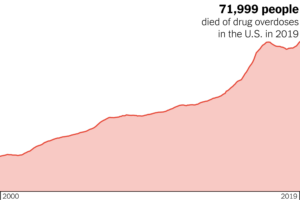 released Wednesday by the Centers for Disease Control and Prevention — an increase of 5 percent from 2018. Deaths from drug overdoses remain higher than the peak yearly death totals ever recorded for car accidents, guns or AIDS, and their acceleration in recent years has pushed down overall life expectancy in the United States.

In this respect, a study published in Science Daily (February 21, 2019)  found that drug overdose death rates in the United States are 3.5 times higher on average when compared to 17 other high-income counties.

What about 2020 overdose mortality epidemic figures?

The recent New York Times aforementioned affirms “It looks as if 2020 will be even worse. Drug deaths have risen an average of 13 percent so far this year over last year, according to mortality data from local and state governments collected by The New York Times, covering 40 percent of the U.S. population. If this trend continues for the rest of the year, it will be the sharpest increase in annual drug deaths since 2016, when a class of synthetic opioids known as fentanyls first made significant inroads in the country’s illicit drug supply.”

But will it stay that way?

The authors continue with the Administration measures to fight overdose mortality epidemic,  “President Trump made much of the slight decrease in overdose deaths in 2018, pointing to his administration’s efforts to expand addiction treatment and restrict the drug supply. Mr. Trump and Congress have provided several billion dollars in grants to states since 2017 for treatment, prevention and recovery services, expanding access to buprenorphine treatment in particular. But at the same time, the administration has continued fighting in court to overturn the Affordable Care Act, a law that has allowed states to expand Medicaid and provide free addiction treatment to low-income adults.”

The article ends his review with this phrase, “Several public health experts said conditions created by the pandemic could hurt the nation’s fragile progress in fighting the surge of drug deaths, but noted that the overdose rate was on its way back up well before the virus arrived. “COVID just makes it a bit worse,” said Dr. Dan Ciccarone, a professor of medicine at the University of California, San Francisco, who studies the opioid epidemic. “It’s a small wave riding on top of a tsunami that continues to devastate.”