A novel method for preserving, transporting and administering vaccines could revolutionize immunization programs in the developing world, circumventing the need for trained personnel and special storage conditions that are often lacking due to the poor infrastructures in many low-income countries. Scientific American reports on this innovative technology: 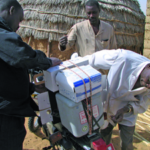 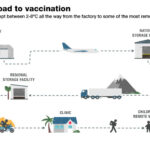 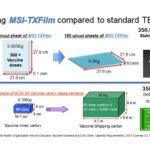 “Vaccines may soon make their film debut. Led by pharmaceutics expert Maria A. Croyle, researchers at the University of Texas at Austin have developed a thin sheet that preserves vaccines and other biological medicines for long periods without refrigeration. This means the carefully cooled vials now used to ship vaccines could potentially be replaced by lightweight, peelable films that can be mailed in an envelope and stored on a shelf.

How to Transport Vaccines without Cooling

Vaccine transporting innovation with film’s components are tailored to suit each specific vaccine candidate and provide a protective coating.

Croyle says “We mixed a vaccine with a specific combination of ingredients that sealed it in a peelable film matrix. Once the vaccine was embedded in the film, the protective covering prevented it from being damaged by exposure to extreme temperature or other harmful environmental factors such as moisture and light,”.[…] “that the [manufacturing] process is quick and uses affordable, standard benchtop equipment. ‘We really wanted to come up with something that would be transferable to developing countries.”

Immunization programs worldwide could be enhanced with significantly lower cost

Immunization programs depend heavily on keeping vaccines cold (two to eight degrees Celsius) as they are transported, sometimes over thousands of kilometers to remote locations. Delivery can be difficult and costly, and transport disruptions can render the vaccines ineffective.

But this new formulation can store live viruses, bacteria and antibodies for several months at ambient temperatures (20 degrees C).

Size is a major advantage of this platform—a letter-sized sheet of the film can carry more than 500 doses of vaccine, about 1⁄900 the weight of equivalent traditional doses. By making it easier and cheaper to ship and store vaccines efficiently, Croyle says, the technology could vastly improve immunization rates the world over, particularly in middle- to low-income countries”.