Skip to content
Home/Bioethics, BIOETHICS NEWS, Origin of the universe and life, Science and Religion, SPECIAL REPORTS/Is There a Purpose in the Biological Evolution of Living Beings? Paper published in a specialized American journal

Is There a Purpose in the Biological Evolution of Living Beings? Paper published in a specialized American journal

The article cited in the title reviews one of the more widely-debated topics of evolution. The purpose of the biological evolution of living beings is also an issue present in the dialogue between science and religion.

Our Observatory at the Institute of Life Science published this article in The National Catholic Bioethics Quarterly (Volume 19, Issue 3, Autumn 2019), which our readers can find in the PUBLICATIONS  section of our website, with a link to the Abstract and the possibility to purchase the entire article. 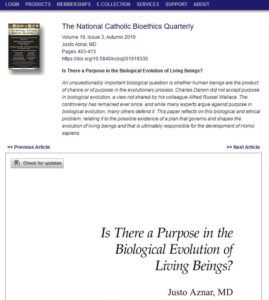 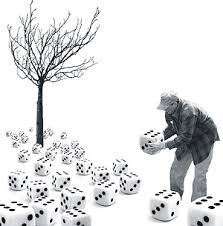 This paper focuses on biological evolution, in particular on the possible existence of teleology (defined as “explanation by reference to some purpose, end, goal, or function”; Encyclopaedia Britannica) in the evolutionary process.

The debate surrounding teleology is whether the evolutionary process has a purpose or has been randomly produced. Below are some excerpts from the aforementioned paper, permitted within the guidelines of the journal.

Below are some points from the article that we think are of special interest within the theory of teleological evolution:

“The possibility of purpose in evolution is articulated in teleological evolution. Francisco Ayala (Spanish-American biologist and philosopher) provides a succinct description of this theory: ‘Evolution can also be considered as a natural process through which God brings living species into existence in accordance with His own plan.’ Ayala goes on to explain that this is in line with the opinion of Artigas and Turbón, who argue that ‘the combination of chance and necessity, variation and selection, together with the potentialities for self-organization can be easily contemplated as the path used by God to promote the process of evolution.’” 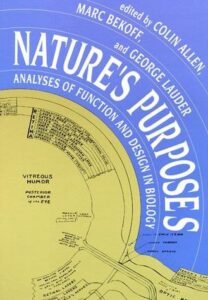 The paper continues:  “[…]these teleological proposals have been—and still are—widely contested by leading evolutionary biologists, who are opposed to including the concept of purpose in biological evolutionary processes. As Luis Alonso (Ciencia y teleología, Investigación y Ciencia no. 507 [December 2018]: 91–92. See also Michael Ruse, On Purpose [Princeton, NJ: Princeton University Press, 2018]) contends, ‘One of the aims of logical empiricism was to eradicate the final cause from the field of meta-science. Philosophers and scientists have remained committed to that work,
particularly in the domain of biology,’ which ‘is supposed to remain free of teleology, as a computer is supposed to remain virus-free.’”

“Thus Dawkins says that ‘the theory of natural selection provides a mechanistic, causal account of how living things came to look as if they had been designed for a purpose.’ Likewise, Gould says that humans are not the result of an evolution directed toward their appearance on earth, but that evolution is a sum of contingencies: a process in which chance plays a fundamental role. Hence evolution is essentially an
unpredictable process: ‘Humans arose, rather, as a fortuitous and contingent outcome of thousands of linked events, any one of which could have occurred differently and sent history on an alternative pathway that would not have led to consciousness.’”

Nevertheless, it seems evident that all biological activity, even at the molecular level, seems to be intentional and targeted. Everything seems to lead toward the fulfillment of the obvious purposes of the organism. Robert Trivers (American evolutionary biologist, sociobiologist, and author) states that ‘even the humblest creature, say, a virus, appears organized to do something; it acts as if it is trying to achieve some purpose.’ Larry Arnhart (Research Professor, Department of Political Science, Northern Illinois University)  holds that ‘Darwin’s biology does not deny—rather, it reaffirms—the immanent teleology displayed in the striving of each living being to fulfill its specific ends… Reproduction, growth, feeding, healing, courtship, parental care for the young—these and many other activities of organisms are goal-directed.’”

Metaphysics are required to explain the entire process

We end our excerpt with this text. “Evolution tends toward ‘increasing complexity’, which we clearly observe but cannot explain. Biology can describe the phenomenon, but the philosophy of nature and metaphysics are required to describe how it occurs. These observations raise the question: does teleology require the existence of a higher intelligence? (read HERE) In reply, Artigas says that such a being must exist as the primary cause of physical existence, a being who directs but does not determine nature. The divine plan then is realized through creativity, contingency, and random at the natural, species, and individual levels.”