Skip to content
Home/BIOETHICS NEWS, Demography, Fertility, NEWS and VIEWS, Videos/American official figures on fertility. The report shows that it has fallen to its lowest point in the last 40 years

A total fertility rate in 2019 is around 1,70 births per woman during her lifetime, which is far below that needed for generational replacement. According to demographers, the minimum replacement rate is 2.1. In fact, the current rate of 1,70 births a dramatic drop from 2007, when there were 4.31 million births and the fertility rate was 2.08, see HERE the entire report. The fallen follow the trend of almost all developed countries which create many social, economical and even affect the very identity of the nation.

So here we are now, with a global fertility rate of just 2.5 – roughly half of what it was 50 years ago. Today, 46% of the world’s population lives in countries that are below the average generation replacement rate of 2.1 children per woman. Because many countries are not repopulating enough to sustain their current populations, we are seeing a substantial imbalance in the ratio of elderly dependents to working-age people, which will only intensify over the coming decades (see more HERE and HERE). Read our previews article on the matter.

The lack of generational replacement appears to be ignored by the scientific community and authorities. Why?

In our opinion, this trend, far from being contrasted is favored for the global promotion of birth control, abortion, etc. Nor is there a global policy to favor families with many children. Could this trend be stopped? In this respect, we have not found a study at the scientific level. 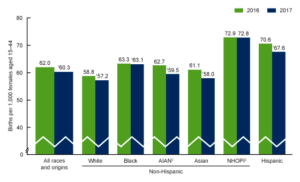