Devices that interact with the nervous system

Neural interfaces are defined in this study as the devices that interact with the nervous system of an individual. They are electronic devices placed on the outside or inside of the brain or other components of the central or peripheral nervous system.

The Royal Society has voiced its concerns, saying that the development of neural interface technology is raising profound ethical, political, social and commercial questions. While the authors recognize that it is “a new frontier for treating conditions like dementia, paralysis, mental health conditions or obesity […] recent announcements from ‘Big Tech’ firms and entrepreneurs have shown their potential to change how we communicate and interact with technology”. These questions need to be addressed as soon as possible to create a mechanism of control to manage the impact they may have on society. One issue that has been proposed is the preservation of the autonomy of the person (read HERE)

Below are excerpts of some of what we consider the more interesting aspects of the aforementioned report. 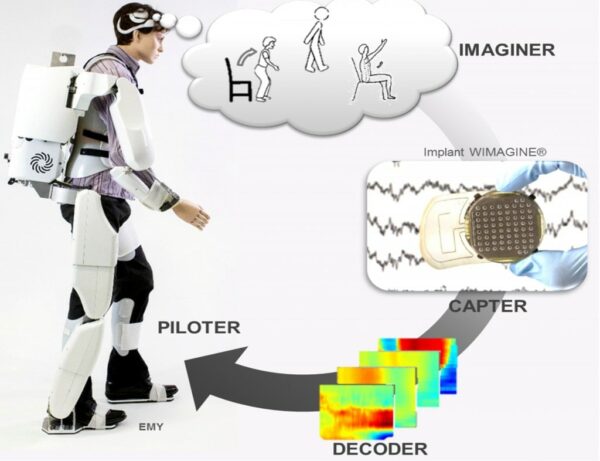 “Many people worldwide already benefit from medical neural interface technologies. In many cases, their conditions have proved drug-resistant and ‘electroceuticals’ have achieved what pharmaceuticals could not. Cochlear implants that substitute damaged parts of the ear provide a hearing for around 400,000 people. Thousands of people with conditions such as Parkinson’s disease, dystonia, and essential tremor have been treated with deep brain stimulation. External, wearable interfaces include a range of devices that assist people who have had a stroke in the rehabilitation. People otherwise unable to communicate have been able to spell out words using brain signals alone, providing them with an invaluable means of interaction.”

“Neural interfaces also raise potential risks for individuals and society. Many of these arise from the possibilities of human augmentation and the ultimate potential for access to people’s thoughts.”

“The prospect of cognitive enhancement also raises issues of access and fairness. Today, citizens in many countries can choose to pay for privately supplied health or education. But, should people also be able to pay for enhanced brainpower when others may not be to afford it?”

We cannot fail to mention the rapid development of brain-computer interfaces that allow the detection and stimulation of affective states. The issue has objective ethical problems we can not treat in this brief work (see HERE).

What do we know about the side effects of brain computer devices that have been already on the market?

In relation to this aspect, we quote an article published in Nature (The ethics of brain-computer interfaces, July 24, 2019), addressing the deep-brain stimulation (DBS) approved by the US Food Drug Administration. The procedure involves implanting electrodes into the brain of people with Parkinson’s disease, obsessive-compulsive disorder, and epilepsy.

”Because it is a technology that can powerfully change activity in the organ that generates our sense of personhood […], ‘It raises questions about autonomy because it’s directly modulating the brain’ says Hannah Maslen, a neuroethicist at the University of Oxford, UK.”

The article continues, “Neuroethicists began to note the complex nature of the therapy’s side effects. ‘Some effects that might be described as personality changes are more problematic than others,’ says Maslen. A crucial question is whether the person who is undergoing stimulation can reflect on how they have changed. Gilbert, for instance, describes a DBS patient who started to gamble compulsively, blowing his family’s savings and seeming not to care. He could only understand how problematic his behavior was when the stimulation was turned off.”

Brain computer devices.  Future of this technology is as immeasurable as the brain

Some of the future possibilities of neuronal technology were analyzed, such as the ability to transmit a “neuronal postcard” to someone so they can see what you see, even if they are not there; people could talk without speaking through access to the thoughts of others, or they could simply download new skills. Companies could also use the possibilities of these new tools to “hack” the brains of people with the certain knowledge that would be of interest to them. This would involve a form of “cyber telepathy”, that is, being able to read certain thoughts of other people.

Our Observatory defends the autonomy, free will and privacy of human persons as an inalienable human right. The possibility of penetrating other people’s thoughts, directly modulating a person’s brain or “hacking” it without their consent would, in fact, be a serious violation of their privacy and opens the possibility of new ways of manipulating people’s behavior. In our opinion, national and supranational institutions should consider it a priority to supervise and make effective regulations in the field of neural interface technologies.

The aforementioned report by the Royal Society provides some ideas in this respect and an overarching principle.

The overarching principle is “to strive for ‘responsible innovation’ that recognizes ethical issues and provides space to consider them”. One option is to follow the Human Genome Project’s process and set up a program to monitor and make recommendations on the ethical, legal and social aspects of the technologies as they evolve. Another is to start with a bespoke public inquiry that takes evidence from experts and interested parties and recommends further steps, such as legislation or institutions – a precedent for this approach being the establishment of the [UK’s] Human Fertilisation and Embryology Authority (HFEA)”.

The study proposes specific and immediate measures to machines and humans fusion:

-A national investigation of the ethical problems presented by neural interfaces, to address what data should be collected, how its safety can be guaranteed and the acceptability of the machines and humans fusion.

-Creation of a neural interface ecosystem to encourage industry and universities to innovate and collaborate in this field.

-National regulatory agencies for medicines and medical devices must test new ways to bring these products to the market and prevent the monopoly of large technology companies.