The grim epidemiological data regarding the evolution of the COVID-19 pandemic in the world, and specifically in Spain, pose a challenge to the work of scientists and public health authorities. The inability to control outbreaks of the pandemic months after its onset, having since gained experience, accumulated resources and improved response time, should seriously cast doubt on all those involved in its control.

In the last few days, we have read in the papers that the authorities at the World Health Organization (WHO), such as the Director-General of Public Health, María Neira, cannot pinpoint what is causing the spread of this second wave of the pandemic in Spain. After analyzing the situation for several weeks, they are still unable to determine what is failing so that data on the disease incidence are the worst in Europe. (1)

COVID-19 and means of transmission

The recommendations that the WHO and other international agencies such as the U.S. Centers for Disease Control (CDC) have maintained so far are based on the fact that COVID-19 spreads primarily between people in close contact (about 2 meters) and through respiratory droplets produced when an infected person coughs, sneezes, or talks. (2)

However, it is difficult to explain the high infectivity of the Sars-COV-2 virus taking only these transmission mechanisms into account.

With regard to contact transmission via fomites, as stated in the scientific and technical information published by the Spanish Ministry of Health on 28 August,

“There are no experimental studies that attempt to emulate natural conditions using an inoculum similar to that found in respiratory droplets (due to its similarity to the influenza virus, it is estimated to be of the order of 10-100 copies of RNA), so actually the length of time that surfaces will remain contaminated after having been in contact with a patient’s respiratory secretions is unknown. No cases of exclusive transmission through fomites have been reported so far.” (3)

For months, numerous scientists have insisted on the likelihood of transmission of the coronavirus through airborne viral particles less than 5 microns in size, known as aerosols, and have pressed health agencies to recognize it, unsuccessfully to date.

On 1 April, a prestigious panel of scientists from the National Academy of Sciences (NAS), led by Harvey Fineberg, former Dean of the Harvard School of Public Health and Chairman of the NAS Standing Committee on Emerging Infectious Diseases and Health Threats of the 21st Century, wrote a letter to Kelvin Droegemeier, head of the White House Office of Science and Technology Policy. In it, they informed him of the results of research showing that the coronavirus can spread not only by sneezing or coughing, i.e. with drops of saliva up to 1 mm in size, but also when talking, or possibly even simply breathing, which would involve microdroplets or aerosols less than 5 microns. (4)

The letter stated that, “While the current [coronavirus] specific research is limited, the results of the available studies are consistent with aerosolization of the virus from normal breathing”, and that “Currently available research supports the possibility that [coronavirus] could be spread via bioaerosols generated directly by patients’ exhalation.”

Subsequently, on 6 July, 239 scientists published a letter urging the WHO and other public health organizations to modify some aspects of the information provided about the likelihood that people could get the virus from the microdroplets floating in the air, or aerosols. (5)

In their commentary, the scientists emphasized the following:

“The current guidance from numerous international and national bodies focuses on handwashing, maintaining social distancing and droplet precautions. Most public health organizations, including the WHO, do not recognize airborne transmission except for aerosol-generating procedures performed in healthcare settings. Hand washing and social distancing are appropriate but, in our view, insufficient to provide protection from virus-carrying respiratory microdroplets released into the air by infected people.”

Management of public information, the principle of prudence and scientific rigor

As on previous occasions, with the delay in recognizing both the ability of asymptomatic individuals to transmit the disease and the need to wear face masks, the expected pronouncement by the WHO including aerosols among the possible means of transmission of COVID-19 and not only by larger droplets, has not been forthcoming to date.

However, the CDC updated its information on this issue on 18 September, finally including aerosols as a likely route of disease transmission. Strangely, however, the following Monday, 21 September, the aforementioned update was withdrawn, reverting to the information previously shown, which excluded this route of infection. The CDC website currently features the following legend that attempts to explain the removal of the update:

“A draft version of proposed changes to these recommendations was posted in error to the agency’s official website. CDC is currently updating its recommendations regarding the airborne transmission of SARS-CoV-2 (the virus that causes COVID-19)” (2)

What was the real reason for this rectification, which meant turning their backs on the abundant evidence in favor of the aerosol transmission route? We don’t know, but one might think of pressure not to recognize evidence that could force too many changes in pandemic prevention strategies, as well as the need to recognize serious errors.

Eventually, on 5 October, the CDC definitively included the possibility of aerosol transmission in its COVID-19 guidelines, amending their previous position on this subject and providing further evidence for the WHO and regulatory agencies to modify prevention guidelines for pandemic containment. (7) 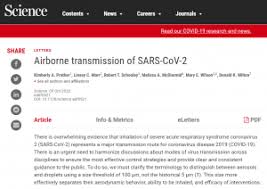 Also on 5 October, the journal Science published an article insisting on the need to recognize airborne transmission by aerosols, which the authors redefine as particles less than 100 microns in size, extending the established criterion to date of 5 microns because they are likely to remain airborne and disseminate, spreading the virus. The signatories say that there is overwhelming scientific evidence that supports inhalation as the main form of virus transmission, and stress the need to modify existing recommendations on prevention. (6)

The bioethical principle of prudence recommends taking into account the evidence that — while not yet irrefutable due to the limited data available — could lead to a significant improvement in the prevention of the uncontrolled spread of a pandemic such as the current one. The evidence exists and has been endorsed by numerous scientists, so ignoring it is a scientifically inexplicable attitude given the seriousness of the infectious process.

The recognition of aerosols as a transmission route for COVID-19 would require modification of many of the prevention strategies currently implemented. Hand washing and maintaining a distance of 2 meters between individuals, even though they are effective tools, should be recognized as completely inadequate. Implementing the compulsory use of effective protective masks should be recognized, in this case, as a preventive tool of the utmost importance. And we stress “effective” because, if the virus travels in microdroplets of less than 5 microns, cloth masks and all non-approved masks would be providing a false sense of protection and contributing to the uncontrolled spread of the infection. The obligation to use masks with proven efficacy, such as surgical or FFP2 masks, would be an essential measure if the scientific evidence pointing to this route of transmission is finally recognized as the foremost one in the current pandemic.

Our appeal and the right to truthful information

Modification of the recommendations on mask use in certain circumstances, such as restaurants or closed premises, would be essential to avoid contagion from aerosol accumulation due to lack of air exchange.

In addition to the changes that this recognition would require, we would add the need to admit another strategic error to be added to the aforementioned late recognition of asymptomatic transmission and the need to use a mask in all circumstances.

Could this be why government agencies, including the WHO, are reluctant to show the evidence available to the public, at the risk of invoking the adoption of measures that might undermine popularity or votes? (read HERE)

The right to truthful information is one of the pillars of the exercise of the principle of autonomy of the population, but above all, it is one of the main instruments for the development of effective health policies.

We again appeal here to the need to urgently recognize the scientific evidence available as to the transmission routes of the Sars-COV-2 virus, and to implement the changes necessary to curb the spread of the pandemic.

Covid-19 retrospective, a disaster that should have been averted.