Skip to content
Home/Bioethics, BIOETHICS NEWS, Demography, Marriage and Family, NEWS and VIEWS/Spot on single parent family – mother or father – as a growing trend in our societies. Children in single-parent households difficulties

Spot on single parent family – mother or father – as a growing trend in our societies. Children in single-parent households difficulties

It is known that several features of life in postmodern society appear to empower individualism. One social effect is the fact that individual homes and single mother or father households have been on the increase over the last few decades in Western societies. Advances in assisted reproduction techniques, gamete banks, gestational surrogate and the expanding fertility industry have made it easy to have children without fathers. Most studies underestimate the children’s well-being in these circumstances, and being motherless or fatherless appears to be normal in our times. Children without know which is some of their parents is a new strong social problem.

In this respect, a study published in The Lancet – Public Health entitled, “Single fathers: neglected, growing, and important” reports that “Families are changing worldwide. Of the world’s 2.3 billion children, 320 million (14%) are living in a single-parent household—18% in France, 20% in Canada, 24% in the UK, 27% in the USA, and 43% in South Africa”. 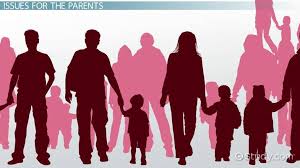 As the study reports; “[s]ingle-parent families are becoming increasingly common in many countries, mainly due to rising rates of divorce and couples having children outside of marriage. These trends are set to increase. The OECD report, Doing better for families, projects that by 2025–30 the proportion of sole-parent families is expected to rise in all OECD countries (except Germany), from 8% for Switzerland and the USA to 29% for New Zealand”. The authors underline that “[m]ost commonly, these sole-parent families are headed by single mothers. But single fathers represent a sizeable proportion: about 2.6 million families in the USA, 330 000 in Canada, and 300 000 families in the UK are headed by single fathers.”

What is the difference between single-mother or single-father families in relation to the parent’s well-being and mental health? The study provides some clues. “Maria Chiu and colleagues examined the mortality of single fathers compared with single mothers and partnered fathers and mothers. Their population-based cohort study comprised 40 000 people who took part in the Canadian Community Health Survey: 871 were single fathers, 4590 single mothers, 16 341 partnered fathers, and 18 688 partnered mothers. Single parents were defined as people who were living with one or more biological or adopted children, and who were divorced, separated, widowed, single, never married, and not living with a partner. Individuals completed questionnaires detailing their lifestyle, including diet, physical activity, drinking habits, and sociodemographic status. These data were linked to their administrative health records to identify medical conditions, health services use, death, and cause of death. After a median follow-up of 11 years, single fathers were more likely to die than partnered fathers and single mothers; partnered mothers were least likely to die. After adjusting for differences in age, lifestyle, health, and sociodemographic characteristics, single fathers’ mortality risk was more than two times higher than other parents’ [our emphasis]. There is a growing body of evidence on the association between social isolation and health and premature death”.  Furthermore, single fathers were also more likely to lead unhealthy lifestyles…” The authors concluded that single fathers are a growing and “largely understudied” population, recommending that “We need to take single fatherhood much more seriously as a public health issue.”

An article on father-absent homes published on the Minnesota Psychological Association website last August said that, “[t]he number of single-parent households in the United States has reached high levels in recent decades. As the extant literature suggests that children raised in single-parent households experience more physical and psychological problems compared to those raised in two-parent households, the implications of homes in which fathers are absent may be important to explore for criminal justice and mental health professionals […]. [The author] highlight[s] ten adverse outcomes associated with homes missing a father. Findings suggest that a negative developmental trajectory may result in children lacking a father in the home, albeit further research in this area is warranted” (Read the full article HERE).

From a bioethical point of view, further studies on the development of children who grow up in mother or father-absent homes are needed, and effective measures must be taken to protect them.