Skip to content
Home/Bioethics, BIOETHICS NEWS, Homosexuality, NEWS and VIEWS/Relaxing blood donation requirements for men with have sex with men in view of the current blood donor shortage? Should patients asume the new risks?

Relaxing blood donation requirements for men with have sex with men in view of the current blood donor shortage? Should patients asume the new risks?

Current requirements for all men who have sex with men to abstain from sex for three months before donating blood overruled with new measures in England and New Zeland.

A recent article published in the British newspaper The Guardian, entitled “Blood donor rules to be relaxed for gay and bisexual men in England”, says that the new policy will take effect in summer 2021. The issue has social, medical and ideological implications. The article reports that, “Men in a long-term relationship with another man will be able to donate blood from next summer, NHS Blood and Transplant (NHSBT) said. The blood donor gays rules currently require to abstain from sex for three months to give blood.” It goes on to say that, “The change in policy will mean risk assessments for donors will be conducted on an individual basis, rather than a population-based one. It will mean that anyone who has the same sexual partner for more than three months will be able to donate if there is no known exposure to a sexually transmitted infection and they are not using anti-HIV drugs PreP or P.” In this respect, an article in the American journal The Washington Post (December 23, 2020) also reported the statement of  Michael Brady, medical director at the HIV charity Terrence Higgins Trust and the national LGBT health adviser for England’s state health service, said the “anal sex deferral makes sense” based on the available medical evidence. Anal sex as an act, irrespective of whether you’re gay or straight, is associated with a greater risk of transmission of blood-borne viruses like HIV,”. The authors of both articles exclude mentioning the high incidence of other STDs in men who have sex with men as a serious added risk and the opinion of patients’ institution.

Guidelines should not be relaxed without strong scientific evidence, this is not the case 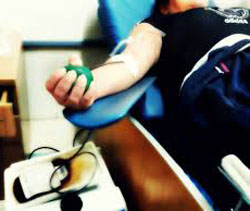 The ongoing pandemic — with safety measures also applied to the blood donor system worldwide and prospective donors concerned about infection — has resulted in the loss of 1 million donations. Nevertheless, in our opinion, and despite these difficult circumstances, guidelines should not be relaxed without strong scientific evidence, since the reliability of the blood donation system itself could be jeopardized.

In this respect, another article published in The Lancet-Haematology approaches blood donor gay risks from a scientific point the view. The paper takes a retrospective look at different measures that have been adopted and gives an update of scientific advances in screening practices to prevent infections. In the particular case of gay and bisexual donors, the authors say that, “Modern HIV testing platforms are highly accurate, with improvements in nucleic acid testing and development of fifth-generation antibody and antigen tests increasing sensitivity to almost 100% (95% CI 96·7–100) and specificity to 99·5%. The sensitivity of HIV diagnostic testing is limited during the so-called window period—ie, the time during acute infection before systemic virus replication and antibody induction. Currently, the window period is 10–23 days for antibody and antigen testing and 7–15 days for nucleic acid testing.” They continue, “Although missed diagnoses during the window period could be further complicated by the use of pre-exposure prophylaxis, blood product testing remains very sensitive to the presence of HIV regardless of ability to diagnose acute infection. Currently, all blood products are subject to rigorous post-donation screening for HIV (among other pathogens), thereby protecting against transfusion of HIV-containing blood.”

Blood donor gays will be able to donate blood in the UK and New Zealand.

The article concludes by saying that, “No transfusion is entirely risk-free, and regulations surrounding blood donation (read HERE) must be crafted with careful consideration of all available evidence, including the sensitivity of virus detection assays, the effectiveness of screening processes for similar pathogens, negative results of stigmatizing policies, and success of implementing behavior-based policies by many countries. In view of the unprecedented need for blood products and our health-care system’s commitment to equitable and evidence-based practices, we argue it is time to discard overly restrictive policies and adopt individual behavior-based risk assessments.”

From a bioethical point of view, we ask: can the donor be required to reveal their private life?  And should the potential beneficiary assume the new possible risk? In these cases, should informed consent of the eventual beneficiary be necessary? Further studies are warranted.

HIV reservoirs are discovered after antiretroviral therapy. They could be the cause of long term effects in patients