“1 million people worldwide get a sexually transmitted infection every day.” WHO

Our Observatory has published a report on the devastating effects of the dramatic rise of syphilis infection and STD (read HERE) based on an official European study published. On the other hand, a U.S. report has shown the same alarming trend among Americans, confirming the World Health Organization’s previous warning about one million people worldwide get a sexually transmitted infection every day.

STDs diseases on the rise even during COVID 19 lockdown

STD Conference last September showed the US COVID – 19 lockdown doesn’t stop the trend to increase of these diseases.

Rates of sexually transmitted diseases, as well as the number of babies born with syphilis, are continuing to rise in the United States. Ninety-four of these infants died as a result of the infection in 2018. The latest government report indicates that gonorrhea and chlamydia infections reached record numbers in 2018, confirming an escalation in these diseases for five consecutive years. Nearly 2.5 million new cases have been reported to the U.S. Centers for Disease Control and Prevention (see more HERE and HERE). 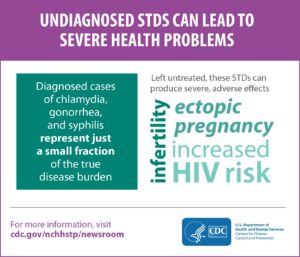 “Increase in STDs for the fifth consecutive year”

An article published on the website 24 Hours said “We’re documenting an increase in STDs for the fifth consecutive year,” said Elizabeth “Torrone, an epidemiologist with the CDC. And the numbers are certainly an underestimate, and she added: STDs often have no symptoms, leaving people unaware they are infected” (read HERE).

CDC reports the results of its national STD surveillance. And for the past five years, the conclusions have been the same: After years of decline, the most commonly reported STDs in the United States — chlamydia, gonorrhea, and syphilis — are on increase (read HERE).

Why are STDs diseases on the rise? A true silent epidemic

An article on the CDC website tries to explain the issue “The subject of STD rates and why they remain so high is a discussion with many nuances and no single, simple answer,” Wyand noted. “But the public health experts who advise us to refer to an eroding STD prevention infrastructure as an element in driving STD rates.” The authors continue,  “Gay, bisexual, and other men who have sex with men (MSM) represent an incredibly diverse community difficult to approach. However, these men are disproportionately impacted by syphilis, HIV, and other sexually transmitted diseases (STDs).” The resources on the following page also provide an overview of the impact of STDs on MSM as well as prevention and treatment information.” (see HERE).

A new prevention global program is needed that should include an approach that focuses on LGBT collectives resolving the aforementioned difficulties that it entails.