The term ageism was coined in the English language in 1969, and is defined in the Cambridge Dictionary as “unfair treatment of people who are becoming old or who are old”. From a bioethical point of view, this definition is an excellent interpretation of ageism – it is not only the old who face discrimination but the explanation also includes the fluid term becoming old, which adequately defines the current trend in our developed countries.

From the beginning of the coronavirus outbreak, healthcare systems have demonstrated shortcomings in the health care of elderly people. In this respect, several articles in the media and scientific papers have revealed the weaknesses of different healthcare systems. Last May, we published an article entitled The elderly are the victims most unfairly penalized by the current pandemic. Now, almost a year later, a review published in the Lancet (March 17, 2021) entitled, Ageism: a social determinant of health that has come of age (read the full article HERE), appears to corroborate our report, saying that, “In the COVID-19 pandemic the vulnerability of older people has been highlighted. Not only has the pandemic taken the lives of many older people, but it has also exposed ageism in different settings—eg, discrimination in access to health care, inadequate protection of older people in care homes and of young people’s mental health, and stereotypical media portrayals that pit generations against each other [our emphasis]”. Several initiatives by governments and supranational institutions have attempted to improve living conditions and health care for this large population group, but they continue to be one of the most vulnerable collectives (read related study HERE). 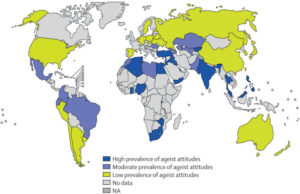 When global prejudice and discrimination exist in our societies, it is difficult to eradicate them. Our main interest is the impact of ageism on older people’s quality of life and health. Based on two WHO studies, the aforementioned article says that, “[l]ike all forms of discrimination, ageism generates divisions and hierarchies in society and influences social position on the basis of age. Ageism results in various harms, disadvantages, and injustices, including age-based health inequities and poorer health outcomes”. The article then goes on to say that, “[g]lobally, ageism affects billions of people: at least one in two people hold ageist attitudes against older adults [our emphasis], with rates much higher in lower-income countries (figure). In Europe, the only region for which data about ageism are available for all age groups, one in three people have experienced ageism, with rates highest among 15–24-year-olds”.

In summary, ageism strongly affects the well-being and health of his huge and growing collective, shortening their life span, worsening their physical and mental health, interfering in recovery from disability and accelerating cognitive decline (WHO report on ageism, March 18, 20121).

Our bioethical statement. “Isolating the elderly and leaving them in the care of others” 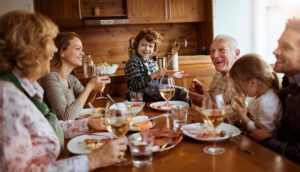 From a bioethical and humanitarian point of view, in addition to these severe adverse health effects, ageism is a great injustice against the dignity of the person that reveals the lack of values and lack of solidarity in our overdeveloped societies. This has recently been denounced by several institutions, including the Catholic Church in a document entitled OLD AGE: OUR FUTURE. The elderly after the pandemic (February 2, 2021), which reviews different documents and statements on the matter. We excerpt this text from the Holy Father’s Encyclical “Fratelli Tutti” and invite our readers — Christians or not — to read it, “We have seen what happened with the elderly in certain places in our world as a result of the coronavirus. They did not have to die that way. Yet something similar had long been occurring during heat waves and in other situations: older people found themselves cruelly abandoned. We fail to realize that, by isolating the elderly and leaving them in the care of others without the closeness and concern of family members, we disfigure and impoverish the family itself. We also end up depriving young people of a necessary connection to their roots and to a wisdom that the young cannot achieve on their own.”

The authors of the Lancet article conclude their review by quoting the WHO’s “Global Report on Ageism”, which “shows that three strategies are effective to reduce ageism: policy and law, education and intergenerational contact interventions”, stating that “The promise of the Decade of Healthy Ageing of WHO can only be fully realized if ageism is recognized as a social determinant of health and tackled.” We fully agree with the last comments of the authors of the valuable study.