As we know, the increase in drug addiction has significant medical, ethical, social and humanitarian repercussions that affect developed countries in particular. This issue has been the subject of several articles by our Observatory. For example, the opioid crisis in the United States (U.S.) has resulted in an unprecedented number of deaths from overdoses, which led the government to ban it even for medical use. Read our special report on Opioids’ valuable analgesic efficacy. Epidemic and the controversy surrounding their abuse in the U.S. and “Harm Reduction” into Health Policy. 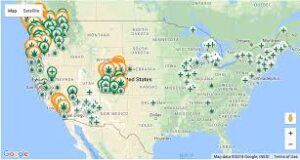 Google maps marijuana store near you

Now, the main medical and bioethical concern is the growing number of U.S. states legalizing recreational marijuana; beginning with New York, several states have, or are going to, decriminalize marijuana use. Given that young people are the age group most affected by drug addiction, how might recreational marijuana legalization affect them?

Although there is no doubt that the free sale of marijuana to those under 18s is prohibited, this age group is also at risk. A study published last November with a sample of youth aged 10-20 years concluded that “It is important to consider recent broad declines in youth (10-20 years old) substance use when evaluating the impact of nonmedical marijuana legalization. States that legalize nonmedical marijuana for adults should increase resources for the prevention of underage marijuana and alcohol use” (Read the full article HERE).

What about young adults, currently among the highest users of this drug?

In this respect, an interesting study published in PEDIATRICS – Official Journal of the American Academic of Pediatrics (May 5, 2021) – entitled Marijuana Legalization and Youth presents an up-to-date and complete review of this crucial matter.

The article begins by saying that the decriminalization of recreational marijuana coincides with a “decrease in the perceived harmfulness of the drug and an increase in its use among youth”. The authors succinctly state its undesirable effects, remarking that “Marijuana use has been associated with several adverse mental health outcomes, including increased incidence of addiction and comorbid substance use, suicidality, and new-onset psychosis. Negative impacts on cognition and academic performance have also been observed”.

The Abstract ends by highlighting the important role of pediatricians in this extremely concerning and potentially harmful impact of marihuana exposure on adolescents in this growing trend in the U.S. toward legalization: “Pediatricians are uniquely positioned to provide innovative care and educate youth and families on the ever-evolving issues pertaining to the impact of marijuana legalization on communities. In this article, we present and analyze the most up-to-date data on the effects of legalization on adolescent marijuana use, the effects of adolescent use on mental health and cognitive outcomes, and the current interventions being recommended for use in pediatric office settings.”

The authors present a rigorous overview of the health impact of marijuana use and the current policy on youth. Before getting into the main body of the study, our Observatory would like to highlight the significant role played by marijuana legalization in further reducing the perceived harmfulness of the drug. The majority of American public opinion already supports the legalization of marijuana, believing the advantage of legalization is to stop criminality and drug trafficking, although it is difficult to establish the supposed benefits and risks.

The authors go on to say that “The impact of policy changes on marijuana use among youth are mixed and present a complicated clinical picture. Understanding trends in marijuana use among American youth is an essential step toward developing healthy policy, adequate education, and targeted interventions to mitigate potential adverse health effects from marijuana use.” To achieve this aim, they cite past figures illustrating the already increasing rates of marijuana use in youth.

Based on previous data and specialized studies, the review concludes that “[…] the states with MMLs [medical marijuana laws] already had higher use and lower perceptions of risk. Therefore, it is not clear that passing the MMLs in certain states actually increased use (read HERE)”. “It is possible that states with higher marijuana use and lower perceptions of risk are more likely to enact MMLs. This explanation is supported in the current analysis by the observation that among states that eventually enacted MMLs, use was higher and perceptions of risk were lower even before the passage of MMLs. These findings provide evidence for the importance of public education campaigns that typically accompany marijuana legislation to help inform communities of the risks and adverse outcomes of marijuana use.”

The review cites other articles that “have illustrated concerning outcomes for youth in general and African American youth specifically”, and show the potential correlation with MMLs: “Studies have found the frequency of marijuana use was significantly associated with the use of other illicit drugs, such as cocaine or crack and heroin, and this association was found to be particularly strong in adolescents”.

The authors nuance these statements, “[emphasizing] that long-term data on outcomes of early-onset marijuana use are still in their infancy and there are still unknown factors”. As such, it is difficult to draw definitive conclusions, and more studies are therefore needed.

What has happened in the states that have changed the legal status of marijuana?

With respect to what has happened in the states that have changed the legal status of marijuana during this short period, with easier access to the drug, they say “[T]here has been an increase in marijuana-related emergency and urgent care visits, for example, in the pediatric population in Washington state and Colorado since the commercialization of medical and recreational marijuana. Despite several studies showing that adolescent use has not increased in states after medical and recreational marijuana legalization, marijuana is still the most commonly used illicit drug among adolescents. Approximately 1.6 million adolescents used marijuana in the past month in 2016, which translates to 6.5% of the entire adolescent population. According to the Monitoring the Future survey, high school students are using marijuana at higher rates than other drugs, whereas alcohol and illicit drug use, in general, have declined. In addition, the perceived risk of marijuana use is at an all-time low, with only 20% of high school seniors perceiving marijuana use as harmful [our emphasis]. Evidence on the impact of marijuana legalization remains preliminary given that the regulation changes have only recently been implemented. Therefore, it is critical to continue researching this issue and monitor youth clinically for the negative consequences of marijuana on overall health and functioning”.

The medical and psychiatric serious impact of marijuana addiction

It continues, addressing the medical and psychiatric impact of marijuana addiction. We suggest reading the section “Impact of Marijuana Use on Mental Health Outcomes”, which includes Surveys from Academic Performance, Brain development, Cognitive outcomes to Suicide (see full article HERE).

The study conclusions affirm that as the trend toward legalization continues, the impact of adverse health effects will present the medical community with new challenges to treat this vulnerable population. The authors highlight some points that need to be considered:

To reduce the serious impact, they propose to enhance current treatments, such as implementing family engagement strategies and incorporating peer social networks that have proven to reduce youth suicide in school settings. The authors also reiterate the great importance of providing education and advocacy, highlighting the unique opportunity of pediatricians to help in this crisis by creating innovative approaches and venues for care.

Bioethical assessment. No mention of the effectiveness of long years of prevention campaigns

From a bioethical perspective, the aforementioned study fails to discuss the effectiveness of prevention campaigns in youth, or to propose a strategy or a review of current campaigns, consequently giving the idea that the rising drug abuse in youth is hopelessly out of control.