“Missing female births, driven by selective abortion of female fetuses, continue to increase across the states…”

The global demographic trend is an issue of great bioethical interest. As a result of medical and cultural factors, many countries are not repopulating enough to sustain their current populations, with a substantial age imbalance and lack of generational replacement (read our last article “Demographic winter… HERE).

This crisis has dramatically affected China and India because, added to the decline in birth rates, sex-selective abortions are increasing on a large scale. The systematic discrimination of women before birth due to political or cultural reasons has created an unprecedented sex disparity (read our news Sex disparity on a continental scale…).

An extensive report published in The Lancet (Vol 9, June 2021) presents a rigorous and up-to-date review of this issue in India. The authors examined birth histories from five national surveys and analyzed 2.1 million birth histories all over the country from 1981 to 2016, divided into three 10-year periods; they also split this data into several topics, beginning with sex ratio on the basis of natural sex ratio – 950 girls per 1000 boys – and adjusting for education, wealth, religion, caste, and place of residence.

The changing contexts were considered, most notably in 1994, when the Indian government adopted the “Pre-conception and Prenatal Diagnosis Act” to prevent sex-selective abortions. However, in 2006, having considered the aforementioned law to be “largely ineffective”, the government attempted to enforce the law and expand cash transfer schemes for births of girls. The study also reports the decrease in fertility and the trend towards having fewer children, following the global trend we described in another study (read HERE). 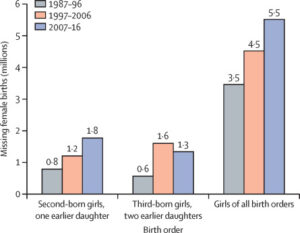 550,000 sex-selective abortions (female) per year in the last decade

The report concluded that “In contrast to the substantial improvements in female child mortality in India, missing female births, driven by selective abortion of female fetuses, continue to increase across the states.”

From a bioethical perspective, the institution of family in India is the most affected by this trend towards having fewer children, but the main problems lie in the decreasing female population and increasing imbalance between males and females. This crisis — like the global demographic winter — is a cultural trend of our societies. Neither government nor international institutions appear to have implemented effective strategies to correct these rising trends.