Skip to content
Home/Bioethics, BIOETHICS NEWS, Coronavirus pandemic, Human Disability, Mental heath, NEWS and VIEWS, Suicide, Videos/Loneliness before, during and after coronavirus including young population. Is it an epidemic?

Loneliness before, during and after coronavirus including young population. Is it an epidemic?

Before addressing the continuous increase of loneliness in Britain and its medical and ethical effects, we give specialists’ opinions of what is happening in the United State in the Coronavirus era (read HERE). In this respect, an article published in Jama Journal says, “Prolonged loneliness is a major yet underappreciated determinant of health, placing individuals at greater risk of premature death than obesity, inadequate physical activity, or air pollution. With more adults than ever before living alone and a large proportion of older adults without access to online connectivity tools, the US has a dangerously fertile environment for an epidemic of loneliness caused by coronavirus disease 2019 (COVID-19) social distancing strategies.” (read HERE).

Last June the Minister of  Loneliness Baroness Barran has said that many of those who felt lonely before the pandemic will continue to do so as lockdown restrictions are eased and recognize that some people will have lost their confidence. The Loneliness Minister is urging everyone who may be feeling lonely, or isolated to reach out to someone, and if they know someone who they feel might be lonely, or isolated, to get in touch (read more HERE).

Taking action in the UK

Small charities and organizations tackling loneliness in their communities can apply to the second round of the £4 million Local Connections Fund from 28 June 2021. The first round of funding helped more than 840 organizations across England to connect small groups of people through projects and activities they enjoy. To mark the week, members of the Government’s Tackling Loneliness Network are launching multiple projects to help the country tackle loneliness; including the Connection Coalition’s Loneliness Advice chatbot service on WhatsApp.

Loneliness medical risks. Is not, “per se” a disease

The authors conclude “Physicians and other health care professionals cannot “fix” loneliness in the same way they treat more discrete problems in clinical practice. Nor should they; loneliness is not a disease to be vanquished, but a useful personal barometer of social needs that must be addressed to enhance connectedness and prevent adverse health outcomes. Long-term approaches to loneliness will likely require major changes to social structures and attitudes. During and after the COVID-19 pandemic, however, clinicians, researchers, and health care systems can play a leading role in expanding assessments, interventions, and research to reduce health risks associated with loneliness.” (read the full article HERE ).

The British Minister for Loneliness and his homolog of Japan made a joint statement in the aforementioned Week of Loneliness in the UK. Read the message from the UK and Japanese Ministers for Loneliness on tackling loneliness (June 17, 2021).

In this respect, more studies have been made on adults but a recent study published in Science (26 May 2021). The study is based on a survey, “National Youth Health Monitor” of the Dutch region of South Limburg. Respondents were 7956 Dutch adolescents aged between 12 and 18 highlights 5 issues:

• Relatively few studies have investigated loneliness in the adolescent population.
• 19.4% of adolescents reported being lonely.
• Factors in family, school and social media context were associated with loneliness.
• Loneliness deserves to be recognized as an important social/mental health problem.
• Interventions focused on preventing loneliness among adolescents are crucial. Read the full study HERE. In our opinion, this large study could give an idea of the youth incidence in Western countries.

See the video about a Survey of American epidemic loneliness (May 5, 2018)
The contemporary notion of loneliness stems from cultural and economic transformations that have taken place in the modern West. Industrialization, the growth of the consumer economy, the declining influence of religion, and the popularity of evolutionary biology all served to emphasize that the individual was what mattered — not traditional, paternalistic visions of a society in which everyone had a place (English magazine The Week October 13, 2018).

United Kingdom’s Government is taking measures to stop this trend. As we said above an entire Ministry was created in United Kindom with this aim, also a spontaneous movement is making a campaign in that country called Project of Loneliness. An official campaign that began by doctors will prescribe social activities as part of a new strategy to tackle social isolation, ministers have announced.

Also, a pilot campaign using Royal Post starts this which saw postmen and women halt their rounds to talk to people who are lonely amid fears growing numbers of people are isolated and suffering health problems as a result.  The plan was trialed in three areas – Liverpool, New Maldon near London and Whitby (The Telegraph, October 15, 2018). 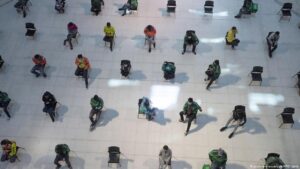 Loneliness in the coronavirus era

In this respect, the aforementioned recent JAMA report says,  that Physicians cannot “fix” loneliness in the same way they treat more discrete problems in clinical practice. Loneliness is not a disease to be vanquished, but a useful personal barometer of social needs that must be addressed to enhance connectedness and prevent adverse health outcomes. Long-term approaches to loneliness will likely require major social changes and attitudes. A cultural issue with particular difficulties to be resolved in a short time. During and after the COVID-19 pandemic, however, clinicians, researchers, and health care systems can play a leading role in expanding assessments, interventions, and research to reduce health risks associated with loneliness. In our opinion, also the social aspect of this crisis is urgent to be approached with effective measures.

From a bioethics point of view, we have a question about the suggested measures. Could be the loneliness epidemic an effect of our cultural values that must be approached from early education?