Skip to content
Home/Assisted reproduction and IVF, Bioethics, BIOETHICS NEWS, biomedical research, Genetics and Genomics, NEWS and VIEWS/Epigenetics of the early development of the human embryo and transgenerational inheritance studies

Studying the possibility of transmitting epigenetic information across generations

Until recently, it was indisputable that the phenotypic traits of the person were defined exclusively by the genetic factors transmitted by heredity. Later non-genetic factors have been proven so that the different genes are activated or not, called epigenetics.

A recent study, which synthesizes this topic, applied mainly to assisted reproduction, has been published on the British website BIONEWS (July 5, 2021) (see HERE). Authors from the University of Oslo deal with different points of view on this matter. They participate in a Department of Health Sciences project of the aforementioned Norwegian university that began in 2017. The project’s aim, still in development, is to understand epigenetic reprogramming in early embryonic development, its importance for human reproduction both from the scientific and ethical point of view and the understanding of heritable epigenetic information.

The study begins by saying that it is becoming increasingly clear that the functions of genes are influenced by many epigenetic factors throughout our lives, including during and before conception. In this sense, it is affirmed that the environmental context can affect the genetic expression in children conceived through assisted reproductive techniques. The topic is considered of great interest due to the findings that have shown a higher incidence of malformations in these children (see HERE). Eating habits, the “lifestyle of parents or grandparents”, as well as the way to store eggs and embryos would have effects on the expression or not of certain genes. All of which have implications for fertility, assisted reproduction, and genetic identity.

Given the multidisciplinary approach of the project, we find it interesting the explanation of the work that the three participants do in very different areas.

Trine Skuland is an embryologist who works in the study of early embryonic development. She begins by saying that when an oocyte and a sperm unite to form the zygote at fertilization, numerous events need to be coordinated to achieve proper development; 30,000 human genes must be turned on or off and this must happen at the right time. The author comments, “No wonder these events are error-prone! ”

Skuland goes on to say that after fertilization, there is an extensive reprogramming through what is called epigenetic marks, whose pattern will decide the activation or deactivation of the genes contributed by the progenitors, included in the DNA of their gametes, thus emerging the embryo that he is already a different human being with his own genetic characteristics that will last until the end of his life.

Why does the study approach transgenerational epigenetic inheritance researches in ART?

This embryologist affirms that her objective is to find the pieces of the great puzzle of the activation of the genome of the new human being, necessary for its normal development, which she considers relevant since more than half of the embryos created during assisted reproduction develop abnormally and have to be discarded (read HERE and HERE).

Brigit Kvernflaten, a medical anthropologist, is another researcher in the team, whose objective is to explore and understand the experiences and perceptions of future parents who opt for an assisted reproduction technique and are interested in the state of the embryo, embryo donation, research and selection in light of a greater understanding of the epigenetic effects related to these techniques (read HERE). In addition to giving an updated vision of the influence of parents, their health, the environment and the lifestyle in the new generated human being.

Joona Räsänen is a bioethicist specialized in epigenetics who affirms that epigenetic transmission from one generation to the next can raise questions of moral responsibility of parents and grandparents since it is proven that epigenetics plays an important role in the transmission of chronic diseases, such as diabetes, as stated by the authors of the article (read HERE). Also, the habits, the lifestyle of the parents and the environment, before and after pregnancy can influence whether or not the children have a chronic disease.

The article goes on to say that the final objective of the project is to make the current knowledge of epigenetic factors more understandable from the very formation of the zygote or even earlier, due to its influence on the gametes of the parents, thus completing what is already public knowledge about the genetic aspects of the origin of the new human beings produced.

The study concludes by saying that the interaction between science, anthropology and ethics in the context of transgenerational epigenetic inheritance researches is complex and that much remains to be investigated.

On August 21, Science published an article titled “Multigenerational epigenetic inheritance: Transmitting information across generations” (read more HERE) that expands on the new findings on this topic, focusing on the issue of epigenetic heritability, which states that the field is entering a very interesting stage in which the mechanisms by which epigenetic information is transmitted to subsequent generations are being better understood without altering the genetic code. 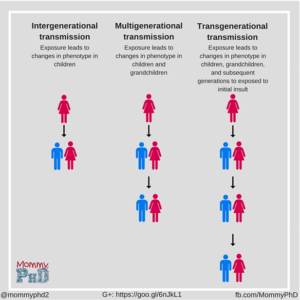 The issue of the duration of these epigenetic changes produced by different mechanisms that are transmitted hereditarily is treated with special emphasis by the aforementioned study given its importance for biology and medicine. We quote below an enlightening text of the new findings, still under investigation:

“Despite the important role that these types of effects (epigenetic inheritance) play in biology, the molecular mediators of this transmission of non-genetic information are only now beginning to be unraveled. Here we provide an intellectual framework for interpreting these findings and how they can interact with each other. We also define the different types of mechanisms that have been found to mediate epigenetic inheritance and to regulate whether epigenetic information persists for one or more generations. ”

The study goes on to say:

“[…] Studies include numerous examples in which a father’s exposure to certain environmental stresses can promote adaptive changes in the offspring. These constant observations of non-genetic inheritance across various evolutionary organisms suggest that such effects could represent a fundamental aspect of biology. […] To date, a growing body of literature has drawn a complex picture of both the phenomena and mechanisms underlying non-Mendelian inheritance. Non-Mendelian effects have been reported to be transmitted from one to an indefinite number of generations […]. ”

Future studies should be mainly aimed at investigating the role of epigenetics and its transgenerational inheritance in the etiology of diseases and human biological evolution, as the book “Transgenerational Epigenetics” (2019) concludes (see HERE).