Skip to content
Home/Bioethics, BIOETHICS NEWS, Ethics of Scientific Research and Medical clinic, Genetics and Genomics, Informed consent, SPECIAL REPORTS/Gender transition: Is there a right to be forgotten?

Gender transition: Is there a right to be forgotten?

Health Care Analysis has published a new study on gender transition, entitled Gender Transition: Is There a Right to Be Forgotten?

The privacy of citizens of developed countries has been affected by access to personal data for marketing, politics and other purposes. In this regard, severe penalties have been implemented for those who use personal data without the express consent of the affected person.

The digitization of medical records has meant a great advance for medicine, but it also facilitates the possibility that the data they contain can be accessed more easily, and even shared without proper authorization (digital version of the patients’ paper chart). Respecting the privacy of medical records, which has always been a priority in the practice of medicine in developed countries and which has contributed to confidence in their healthcare systems, seems to be wavering due to the pressure healthcare providers receive from medical institutions to make their data accessible for use in research. This has fostered the creation of a system that allows records to be anonymized in order to maintain patient data protection.

It is precisely in these countries that the medical record linked to genetic data is one of the more extensive lines of research to predict and take care of the health of the patient and their children.

We cannot fail to mention the relatively recent complaint against the military of the current Chinese regime, which would have bought the genetic data of people from persecuted ethnic groups from a specialized company to further their persecution. 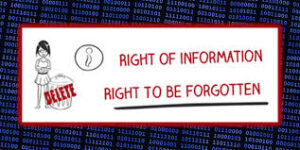 It is public knowledge that national and international authorities are very concerned about maintaining the privacy of their population’s data and are taking steps to prevent their use without prior consent. In this respect, the data protection laws that exist globally are constantly updated. In the United States and the European Union, the so-called “right to be forgotten” has recently been added to the known legal restrictions concerning personal data protection (General Data Protection Regulation – GDPR); this means that any individual has the right to ask organizations to delete their data.

We are particularly interested in knowing how this new right of the individual is exercised in the area of medicine, particularly in the medical record.

In this sense, the journal Health Care Analysis, which has a great reputation in the area of bioethics, has published a very interesting study, entitled Gender Transition: Is There a Right to Be Forgotten? (8 April 2021) (See HERE). It begins by saying that the literature on the application of the “right to be forgotten” in the medical area is scarce, given the recent implementation of this new legal provision, and proposes that this lack of studies be supplemented with a discussion of the ethical aspects associated with the exercise of this right.

It cites the example of the United Kingdom where, until recently, it was illegal to delete any data from the patient’s medical record. Now, however, because of the problem we have outlined, it is considered legitimate to delete certain data such as decisions about the end of life, like asking to die at home and other provisions such as “do not resuscitate” orders, and personal information that is no longer required by the National Health Service.

To address the bioethics of this new possibility of erasing certain personal data from patient medical records, the authors say that “In gender transition, this right represents a powerful form of control of personal data, especially health data that may reveal a gender with which they do not identify and reject”. In this circumstance, it would be appropriate to ask whether there is a right and whether it is ethical for these individuals to delete these personal data from medical records.

The article describes the complexity of gender transition in its legal, social, and medical aspects and the different regulations that exist in different countries, “mainly because there is scientific evidence of the relationship between stigma and health care vulnerability of transgender and gender-nonconforming people”.

The authors then do an extensive study on the different options that transgender people may choose, and the advisability or otherwise of hormonal treatment and early surgery, citing several articles. In this regard, our Observatory has covered the medical and ethical aspects of current therapies and their scientific bases (see HERE).

The authors seem to share the theory of gender ideology according to which gender identity is not based on the biological sex of these individuals, but on the gender with which they identify, a topic we have discussed in several articles showing the scientific inconsistency of this ideology (see HERE). It also mentions the policies of public registries in different countries to cater to these cases, which we shall not address here.

Beyond the objective discrepancies with this stance and the medical treatments that are being applied to these individuals (see HERE), we are interested in the authors’ bioethical opinion in relation to the possibility of permanently erasing the medical data of these subjects (which would include genetic data), which would be permitted within the framework of the new legal provision of the current data protection law.

Under the sub-heading Privacy, Data Protection and Identity Projection, the article discusses the different notions of the term “privacy”, assessing this key term in the context of the right to forgetting established by the new law.

Privacy and the necessity of medical data erased to preserve it

The authors show that privacy arises from the concept of human dignity, and claim that reducing the value of human dignity to a question of honor/image (as advocated by certain philosophical schools) is to minimize this concept. They say that human dignity “represents an abstract capacity and potential for self-determination, regardless of the ability or concrete will for it”, which from personalist bioethics is correct.

The article continues, stating that “[t]his ability may not even exist, as it necessarily happens when one recognizes the human person’s dignity with a mental disability. Thus, human dignity relies upon considering the human being as an end in itself, never a means, and this perspective goes far beyond image or honor. From this angle, human dignity is imposed on the individual himself and considered a universal value.” It goes on to say that “[f]reedom is then a condition of dignity. However, for freedom to exist, there is another condition: privacy. Therefore, privacy is a condition of human dignity”. The authors then develop this idea, showing that without the right to privacy, the autonomy of the person would not be respected, which would affect his or her own dignity.

The authors analyze privacy in an environment where the “Internet of Things”, i.e. information registers, is now associated with artificial intelligence that allows real-time control of personal data. This continuous development of technology is what makes it increasingly necessary to protect personal data with new mechanisms to guarantee these human rights in order to protect privacy and confidentiality.

Could be medical data erased?

In general, the exercise of the right to be forgotten is practical when it refers to certain data that are no longer useful or constitute decontextualized information, but this new provision, already in force in the European Union, does not set limits on medical and genetic data. In terms of these data, the article cites well-known authors referring to the right of individuals to be informed about their biological ancestry. We have previously examined this matter, especially in reference to the ethical difficulties of protecting the anonymity of gamete donors versus the right of conceived children to know the identity of their biological parents (See HERE).

Medical data erased and the offspring right to be informed

Then — and to provide a philosophical basis for the bioethical reasons that, in the case of transgender people, support the right to be forgotten — the article explains the position of Mill’s utilitarianism (social liberalism) and Christianity with respect to the limits of freedom and self-determination that the authors say allow these rights to be exercised, provided that they do not adversely affect third parties. Based on these principles that we have summarized and the “principle of liberty and the proportionality principle as a foundation in human rights law”, they state:

Following this list of the possible harms that would result from the exercise of the “right to be forgotten” in the medical and genetic area, the authors consider that they have presented sound arguments to conclude that there are objective “ethical and legal difficulties” to allow the aforementioned data to be erased. Our Bioethics Observatory based on personalistic bioethics agrees with this statement.