Japanese researchers have published an article in the prestigious journal “Nature Human Behaviour” studying the behavior of eight-month-old babies in the face of aggressive behavior.

The main objective of the study was to investigate whether in early childhood moral behavior can be established in the babies analyzed by evaluating their ability to show rejection of aggressive attitudes towards third parties and to determine whether preverbal babies punish and how they punish antisocial agents who have not directly harmed them.

This behavior is unique to humans and appears to be universal across cultures.

Although the study evidences this moral behavior in eight-month-old babies, it is unknown at what point in development this capacity appears in humans.

Previous research indicates that children under 19 months are willing to punish antisocial people, avoid interacting with them, and expect antisocial actions to be punished. In addition to punishing antisocials, they also prioritize helping victims.

By age six, in order to punish a transgressor who has acted unjustly, they are capable of sacrificing their own resources. Until now, no experiments of this type had been carried out on preverbal children.

What the experiment consisted of 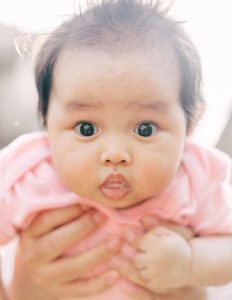 The study authors have developed a participatory cognitive paradigm using gaze contingency techniques, in which infants can use their gaze to point to agents displayed on a monitor.

In this paradigm, fixing the gaze on an agent triggers a stone to crush him. Across five experiments conducted with a sample of 120 participants, it is revealed that eight-month-old infants increased the frequency of their aggressor-selective gaze after observing aggressive interactions. They also punished others who displayed antisocial behaviors.

These findings indicate that in early childhood there is a disposition to punish people who show antisocial behavior towards other individuals and also emphasize the importance of punishing third parties as a resource in cooperative human interaction. This behavioral tendency may be a human trait acquired through evolution.

In the practical phase, the first six trials subjected the babies to a control of their gaze fixation on a single object (a red or blue circle placed alternately to the left or to the right), which, maintained for 500 ms, resulted in the fall of a stone and the crushing of the object. This phase was established to reduce lateral gaze bias. In four subsequent trials, the babies were presented with two objects side by side (a red circle and a blue circle) instead of a single object. When they stared at either object for 500ms, a stone fell and crushed it.

In the following pretest, infants experienced gaze fixation control events identical to those in the practice phase, except that the targets were two geometric agents with eyes (e.g., green and orange squares). The presented position of the geometric agents (left or right) was arranged in such a way as to obtain consistency in the results between the pre-test and the post-test between the participants.

The movie phase of Experiment 3 used identical apparatus and animations as in Experiment 1. The events looked at in Experiment 3 were also identical to those in Experiment 1 except that, during the practical phase, the babies were presented with two objects next to each other (a red circle and a blue circle) in all ten trials. This modification was to implement a 50% reinforcement probability. In the practical phase, before and after the test, when the infants fixed on one of two objects, half of the events on which the gaze was fixed on involved the object (or agent) they were looking at, while the other half half involved the object (or agent) they did not look at. The reinforcement order was randomized among infants; however, a given gaze fixation event was repeated no more than three times.

Experiment 4 used the same apparatus as Experiment 1. The events looked at in the pre-test and post-test were also identical to those in Experiment 1 with a few exceptions. The eyes of both geometric features were divided into white parts and black parts, with the aim of removing perceivable ‘animation or agency’. The self-propelling ability of objects and any distortion on contact have also been removed.

The same as Experiment 1.

After observing an aggressive interaction, infants up to eight months of age fixed their gaze on the aggressor more frequently, with the apparent intention of punishing him (Experiment 1). Three control experiments excluded alternative interpretations of these increases in selective looks at the aggressor: preferential looking at agents (Experiment 2), expectation that the agent would be punished (Experiment 3) and perception of collisions as a negative physical event instead of an aggression. (Experiment 4). Finally, the researchers replicated Experiment 1 to confirm that their findings indicated robust psychological phenomena (Experiment 5). 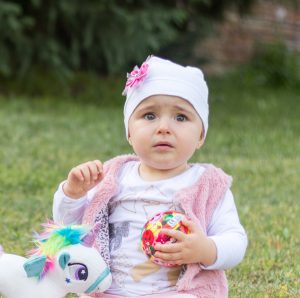 Furthermore, the researchers’ findings indicate that the motivations for punishment are likely to be intrinsic, rather than extrinsic results of cultural learning. However, previous research using gaze fixation techniques demonstrated that infants of the same age showed gaze-related behaviors for intentional control on the monitor. However, all three control experiments confirmed that selective looking behavior involves decisions related to punishment.

Infants increased their selective gazes toward the specific agent (the aggressor) only when their gaze was associated with a consistently occurring negative event (punishment; Experiment 2) (100% reinforcement; Experiment 3) and when the event provided social information about the agents (who was the aggressor or the victim; Experiment 4). In other words, the infants changed their behavior to achieve their goal only when they perceived the means to punish, had a sense of self-control for punitive behavior and were in a situation that required punishment. They did not change their behavior if any of these three elements were missing. Consequently, the behaviors related to infant gaze were likely decisions made with the intent to punish.

The neuroethical approach to the origin of moral behavior in humans has been widely studied. Different experiments have tried to analyze the possible causes that determine this moral behavior. Thus, through the use of novel neuroimaging techniques, attempts have been made to establish the neural bases of moral agency in humans.

The influence of emotions in moral decision-making has been evidenced by some experiments that have been the subject of the publication of a related book. Apparently, then, we have acquired codes and mechanisms to mount, on a first emotional imprint, rapid moral reasoning and judgments and with them an immediate social response.

There would thus exist a universal ethic that can be formulated on a neurological basis, which would follow an adaptive imperative aimed at survival and protecting the group.

It could be argued, as the experiment with eight-month-old babies reported in this report seems to confirm, that we are born with a moral grammar, with a toolbox that allows us to construct concrete moral systems and explain the diversity of moral cultures. In such a case, as Camilo Cela says, «one cannot speak of a “universal ethical code”, but of a “universal tendency to accept ethical codes”».

This would have happened during evolution, and it would have been oriented towards survival, although this explanation of our moral behavior is insufficient if we do not integrate free will into the equation, which would draw the line towards progress and not only towards survival. And progress requires that moral choice directs us towards our own good and that of the group in a constructive way, which would imply recognizing and respecting the rights we have as humans.

As López Moratalla states “the outcome of man’s natural inclinations is on one hand linked to instinctive systems of animal survival and to basic emotions, and on the other, to the life of each individual human uninhibited by automatism of the biological laws, because he is governed by the laws of freedom.”.