“The Organ Repair Center”. Towards a new reality

Replacing organs and tissues on demand could save or improve millions of lives each year around the world and create public health benefits. According to the Eurotransplant website, in 2021 there were more than 14,000 people on the waiting list for organs.

Undoubtedly, transplantation is the definitive solution for patients with chronic and terminal organ failure. Fifty years is the gap in time required to go from experimental kidney transplantation to clinical routine in the 1980s. In the last 40 years, the fundamental fact has been the development of transplantation as a routine surgical and medical act in many of our hospitals.

But the generalization of the transplant, in a contradictory and at the same time expected way, has generated an increase in the waiting lists since more and more patients are accepted in the transplant programs. According to its website in 2021, there were more than 14,000 people on the organ waiting list for Eurotransplant, which is responsible for the allocation of donor organs in Austria, Belgium, Croatia, Germany, Hungary, Luxembourg, the Netherlands and Slovenia.

Approximately 10,200 active people on the waiting list were waiting for a kidney transplant, while about 1,400 people were on the list for a liver transplant.

After many decades with little change, the field of organ preservation is experiencing a resurgence.

The greatest progress has been made in the field of kidney and liver transplants, although there is still a lot of room for further improvement.

While a donated organ is outside the body prior to its implantation, it lacks oxygen and the interruption of circulation allows small clots to form, which can damage the organ. This damage remains a major barrier to transplantation, as it renders many organs unviable and is associated with decreased survival of these transplanted organs.

Traditionally, organs are kept at low temperature (2-5 ºC) surrounded by ice (hypothermic preservation). But this is limited to a few hours.

Ex situ perfusion technologies have been introduced to improve the quality of the graft or to extend the duration of preservation, which would facilitate the use of these organs. Despite these advances, the prolongation of the total time outside the body of human organs remains a serious limitation. 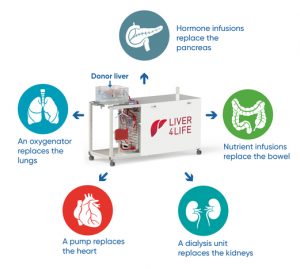 It is in this context that the recent breakthrough by the team of the Department of Surgery and Transplantation, Swiss Hepato-Pancreato-Biliary (HPB) and Transplant Center, University Hospital Zurich, is described. A group of engineers, biochemists and doctors developed a bioreactor to ensure organ viability. It is a complex machine that integrates multiple basic physiological functions, including automated remote control of all key parameters.

The engineering design of the machine had to address the known limiting factors inherent in any ex situ solid organ perfusion for a few hours; hemolysis, hemodynamic stability, glucose control, pathological deposition of glycogen in the liver, dilution and quality of the perfusate and, eventually, pressure necrosis, after several days under mechanical perfusion.

Previously published preclinical studies,using discarded pig and human livers showed normal organ function and architecture for up to 10 days outside the body in selected organs. However, transplantation of these grafts into humans was not performed.

On May 31, 2022, the same team has reported the transplantation of a human liver discarded by other centers, which could be preserved for three days using an ex situ normothermic perfusion machine.

The liver was transplanted and exhibited normal function, with minimal reperfusion injury and the need for a basic immunosuppressive regimen. The patient rapidly recovered his normal quality of life without any signs of liver damage, such as rejection or injury to the bile ducts, after 1 year of follow-up.

According to the authors “This inaugural clinical success opens new horizons in clinical research and promises an extended time window of up to 10 days for assessment of viability of donor organs as well as converting an urgent and highly demanding surgery into an elective procedure”.

The ability to replace organs and tissues on demand could save or improve millions of lives each year worldwide and create public health benefits. The unmet needs for organ and tissue preservation imply enormous logistical constraints for transplantation, regenerative medicine, drug discovery, and a variety of rapidly advancing areas encompassed by biomedicine.

The creation of bioreactors as an alternative organ preservation method may represent a paradigm shift in clinical transplant practice and an increase in the generation and use of implantable organs that are currently discarded.

In fact, the “Organ Repair Center” is a structure that is being implemented in several countries around the world.

Ethically and technologically, it is a commendable way to take advantage of organs that are currently discarded and to reduce the waiting list.