Skip to content
Home/Bioethics, BIOETHICS NEWS, Gene Therapy, Genetics and Genomics, NEWS and VIEWS/The molecule responsible for classifying memories as positive or negative in the brain is discovered

Researchers at the Salk Institute in La Jolla, California, have identified a brain molecule responsible for associating positive or negative emotions with a memory. The finding, published in Nature, could be used to treat anxiety, depression or post-traumatic stress.

“We’ve basically gotten a handle on the fundamental biological process of how you can remember if something is good or bad,” explains Professor Kay Tye, a researcher at the Howard Hughes Medical Institute and Salk’s Systems Neurobiology Laboratory. “This is something that’s core to our experience of life, and the notion that it can boil down to a single molecule is incredibly exciting.”

Faced with a certain experience, the brain assigns a negative or positive emotion to it, which is an evolutionary mechanism to learn to avoid negative experiences and to seek positive ones. This mechanism is called ‘valence assignment’ and depends, at least in part, on a group of neurons located in the brain’s basolateral amygdala (BLA).

Thus, in experiments in mice it was observed that, when faced with a positive stimulus, such as tasting a sweet food, a specific group of these neurons is activated, associating a positive valence to the experience. On the other hand, when faced with a negative stimulus, such as a bitter taste, other different neurons in the same brain region are activated, assigning a negative valence.

“We found these two pathways—analogous to railroad tracks—that were leading to positive and negative valence, but we still didn’t know what signal was acting as the switch operator to direct which track should be used at any given time,” explains Tye.

In the study that has now been published, neurotensin has been postulated as the signaling molecule responsible for the process. It is a neurotransmitter generated by neurons from another brain region, the paraventricular nucleus of the thalamus (PVT), which project to the BLA. 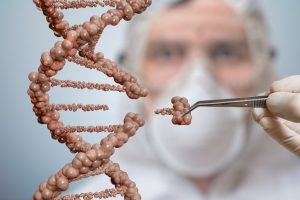 Using the CRISPR gene editing technique, they eliminated the gene that allows the cellular expression of neurotensin in mice and found that the animals were unable to assign a positive valence to their experiences, so they did not learn to value the sweet taste as desirable. In contrast, the lack of neurotensin did not prevent the assignment of negative valences to bitter taste, and even enhanced this mechanism.

These results suggest that the “default” state of the brain is biased toward fear and rejection of the negative, rather than toward seeking the positive: neurons that determine negative valence will be activated in the face of a new experience unless neurotensin kicks in. From an evolutionary point of view it makes sense, Tye explains, as it prioritizes above all that the individual avoids potentially dangerous situations. Further experiments showed that high levels of neurotensin promoted learning through gratification, and attenuated negative valence.

“We can actually manipulate this switch to turn on positive or negative learning,” explains Hao Li co-first of the research. “Ultimately, we’d like to try to identify novel therapeutic targets for this pathway” he says. The researchers still have questions about whether levels of neurotensin can be modulated in people’s brains to treat anxiety or PTSD.

This discovery is fully related to the area of ​​neuroethics that studies the ethical implications of neuroscientific advances. Of course, the improvement of treatments for the mentioned mental illnesses would be very positive. However, these advances could also be used to exert unwanted and unconsented external control, even for non-medical purposes, over the brain of individuals. Thus, the possibility of intervening in the modulation of neurotensin levels—as has already been done with dopamine, another important neurotransmitter known as the “pleasure hormone”—can alter emotional perception, associated memories and, therefore, the subsequent conduct. The abuses that could be committed are evident, so the development of this type of intervention on the human being must be accompanied by a clear definition of the permitted purposes, in accordance with respect for the dignity of the person and other values ​​derived from this, especially autonomy.