According to a recently published study, an increased incidence of cancer has been detected in children born after the transfer of frozen embryos in assisted reproduction procedures.

Currently, in vitro fertilization (IVF) is a very widespread treatment in developed countries and the option of freezing the embryos resulting from IVF in liquid nitrogen to implant them in the uterus later has increased considerably. It is estimated that 8% of the children born in Europe are produced by IVF and that even, in some countries, the number of children born from frozen embryos exceeds that of children born after the transfer of fresh embryos.

At the moment, the effects on the baby’s health associated with the freezing process are unknown, so the study published in the journal PLOS Medicine now provides valuable data on whether this technique could increase the risk of cancer. It included the medical data of 171,774 children born after the use of assisted reproductive techniques and 7,772,474 children conceived naturally. 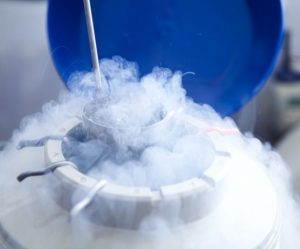 However, when the overall cancer incidence among spontaneously conceived children was compared with respect to the group of children who were conceived after IVF (from both fresh and frozen embryos), no significant differences were observed.

The conclusion of the study is that children born after frozen embryo transfer had a higher risk of childhood cancer than children born after fresh embryo transfer and spontaneous conception. Despite this, the results should be interpreted with caution, given the limited number of children who developed cancer. Although the risk is low, these findings are important considering the increasing use of embryo freezing. More studies will be needed to confirm whether children born from frozen embryos have an increased risk of cancer throughout life.

Previously, we have published several reports that refer to an increase in the rate of perinatal morbidity and up to adolescent age in those born by IVF compared to those who have done it naturally. This data referring exclusively to the incidence of cancer in the case of using frozen embryos is a new fact about the risks of the use of assisted reproduction techniques.

On the other hand, the journal “Hypertension” of the American Heart Association has published a study in which it relates the use of frozen embryos in assisted reproduction techniques and the increased risk of suffering from hypertensive disorders during pregnancy. To do so, the research used a population-based cohort study with sibling analysis.

The study compared women who had conceived both after natural fertilization and after undergoing IVF techniques. Thus, it could be dismissed that the hypertension was due to whether the embryo was frozen or not. This study has become the largest to include sibling comparison to date. And it included data on nearly 4.5 million pregnancies: 4.4 by natural conception, 78,000 by fresh embryo transfer and 18,000 by frozen embryo transfer.

The research revealed that there was a higher risk of hypertensive disorders during pregnancies after frozen embryo transfer than after pregnancies by natural conception, both at the population level (7.4% versus 4.3%) and in sibling comparison.

In those pregnancies in which fresh embryos were transferred, the risk was similar to that of natural conception.

In addition, the same study supports that 7% of children born by frozen embryo transfer were born prematurely, as well as 8% of those conceived by fresh transfer, compared to 5% of premature babies after natural conception.