Paleoanthropology is the scientific study of human evolution

Paleoanthropology is the scientific study of human evolution and appears to be an exciting scientific field, as it investigates the origin, over millions of years, of the universal and defining traits of our species. To this end, human fossils and other archaeological remains that can provide clues about our ancient past have been studied, such as tools, footprints, evidence of hearths or butchery marks on animal bones. The size of the human bones, their shape and the marks left by the muscles tell us how those predecessors moved or held tools, and how the size of their brains changed over time. Archaeological evidence refers to the things these hominids made and the places scientists find them.

The study of all this type of evidence has allowed us to trace fundamental traits of human evolution. The existence of a common ancestor between humans and the great apes of Africa can be dated between 8 and 6 million years ago. One of the first defining features of humans, bipedalism (the ability to walk on two legs), evolved more than 4 million years ago. Other important human characteristics also gradually developed, such as a large and complex brain, the ability to make and use tools, and the capacity for language. All this evolution took place on the African continent, with the first migrations into Asia around 2 million years ago, although, in time, all these migrant groups became extinct. There are thought to be up to 20 different species of hominoids whose evolution, possible mixing with others, or cause of extinction is unknown. 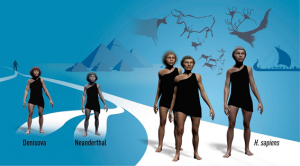 Our species, modern humans or Homo sapiens, is the only surviving species of the genus Homo and originated in Africa 200,000 years ago from Homo erectus. About 60,000 years ago, a new migration took place that spread throughout the world in relatively short time[1].

The first Neanderthal fossil was discovered in 1856 in the Neander valley near Düsseldorf in Germany. Since then, researchers have endeavored to discover the position of Homo neanderthalis in modern human evolution. We know that the Neanderthals appeared 200,000 years ago in Europe, the Middle East, and Central Asia, and became extinct about 30,000 years ago. So, for about thirty millennia, they coexisted with our species in these territories.

DNA, one of the most incredible scientific discoveries of the 20th century

In the 1950s, the structure of the molecule responsible for heredity, DNA, was discovered.  This molecule is vitally important for life, as it provides the instructions the organism needs to carry out the functions of life and the ability to copy itself. The property of heredity makes the DNA molecule a recorder of evolutionary history.

However, its use in Paleoanthropology did not seem possible, since the passage of time, even many thousands of years, the corrosion of possible human remains, interaction with bacteria and fungi over hundreds of centuries and also with modern humans, made it impossible to put the pieces together. We have to consider that we have to determine the order of the four chemical bases that make up the DNA molecule and that the human reference genome has 3 billion base pairs.

Svante Pääbo, who has just received this year’s Nobel Prize in Physiology or Medicine, was predestined for research, as his father and mother were scientists; moreover, his father, Sune K. Bergström, a biochemist, was also awarded the Nobel Prize in Physiology or Medicine in 1982. He studied Humanities and Medicine and, once he had obtained his doctorate in Molecular Genetics, he took on this problem of studying DNA that had undergone degradation for tens of thousands of years. As he himself acknowledges:  “There are all kinds of DNA damage that can cause you to determine the wrong sequence, especially when you start with very few molecules, and there is also human DNA contamination that is almost everywhere[2].”

Faced with this, Pääbo set out to move forward by applying important technological developments to isolate and study the genetic information, and by implementing strict clean room techniques and silica-based purification methods. The result was that it opened the field of using DNA in the investigation of our ancient past with much more precision.

Since 1997, he has worked hard at the Max Planck Institute for Evolutionary Anthropology in Leipzig to improve the techniques for extracting degraded DNA, while at the same time advancing in his attempts to sequence the genome of the Neanderthals. To do this, he sought international collaboration, relying on a team of up to 50 scientists and worked with 70 samples of bones and teeth from different sources.

In 2010, he published the remarkable achievement of sequencing the Neanderthal genome in an article[3] co-authored with all his collaborators, in which he presented a draft sequence composed of more than 4 billion nucleotides from three individuals.

An open road towards new and varied discoveries

The field was opened up to new and interesting discoveries about our past. Soon, Pääbo and his team were able to determine, from the DNA of a 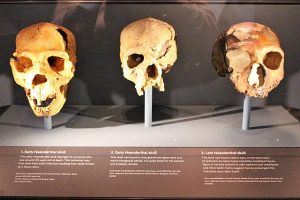 40,000-year-old finger bone found in a cave in southern Siberia, the existence of a new group of hominids called “Denisovans”, named for the cave in which the bone was found[4]. The reconstruction of the Neanderthal DNA has made it possible to identify links between its genome and that of modern humans, proving that Homo sapiens had sexual relations and offspring with the Neanderthals.

By studying how genes flowed between ancient hominid populations, researchers have been able to track the migrations of these groups. Thus, for example, we know that the closest living relatives of the Denisovans are the present-day Melanesians, the inhabitants of the Melanesian islands of the Western Pacific, i.e. places such as New Guinea, Vanuatu, the Solomon Islands and Fiji. These populations carry between 4% and 6% of Denisovan genes, although they also carry Neanderthal genes. The percentage of Neanderthal DNA in non-African humans is estimated to be in the order of 1% to 4% (in Africans it is non-existent since there was no Neanderthal population in Africa).

It is also confirmed that the only migration that appears to have left modern human offspring in Europe and Asia was that of 60,000 years ago. The groups that migrated earlier apparently became extinct or were absorbed by the Neanderthals or other ancient populations.

The legacy of these genetic flows between ancient populations has also had an influence on our physiology. Researchers have found that the Neanderthal genome has contributed to several diseases seen in present-day human populations, such as diabetes, arthritis, and celiac disease. Similarly, some genes inherited from Neanderthals have been shown to be beneficial or neutral, such as genes for hair and skin color, sleep patterns, and even mood[5].

Svante Pääbo’s long career has revealed an immense molecular past hidden in existing archaeological remains, which is transforming the field of archaeology and allowing us to glimpse new and unforeseen discoveries. For this reason, in the scientific field, he is considered the founder of a new discipline, paleogenomics. This was recognized by the jury of the 2018 Princess of Asturias Awards: “Svante Pääbo has opened up a new field of research, paleogenomics, which has allowed us to learn about the recent evolution of numerous species, including humans.”[6]

Now, he has been recognized again by the Nobel Assembly of the Karolinska Institute by awarding him the 2022 Nobel Prize in Physiology or Medicine: ”Through his groundbreaking research, Svante Pääbo established an entirely new scientific discipline, paleogenomics”.[7]

Svante Pääbo is still active with his work and his main line of current research focuses on comparing the Neanderthal and Denisovan genomes with those of modern man and trying to clarify the functional relevance of exclusively human genetic variants, an exciting challenge that is important for all Homo sapiens.[8] 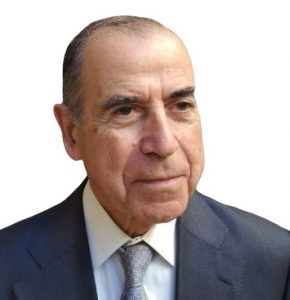 [7]  The Nobel Assembly at Karolinska Institutet  Press release: The Nobel Prize in Physiology or Medicine 2022 – NobelPrize.org 2022-10-03