Extreme China’s air pollution is so that independent research group Berkeley Earth estimated it contributed to 1.6 million deaths per year in the country. 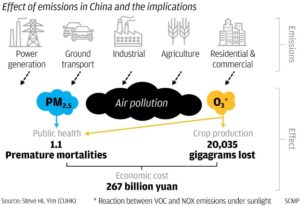 The smog is heaviest in northern industrial provinces such as Shanxi, the dominant coal mining region, and steel-producing Hebei. Emissions there contribute to the planet’s largest mass of PM 2.5 air pollution—the particles which pose the greatest health risks because they can become lodged in the lungs. It can stretch from Mongolia to the Yellow Sea and often as far as South Korea.

The country had become the world’s No.1 carbon dioxide emitter as it rose to dominate global exports, a process which began several decades ago but got its biggest lift with World Trade Organization entry in 2001 (Bloomberg, March 9, 2018).

China’s efforts to release the health impact of its uncontrolled growing economy are manifested by the Government but until the results have significative effects the life and health of Chinese people are in great danger.

Must the West rely on the promises of the Chinese Government or must ask for an independent evaluation in the framework of the fight against climate change in which this country claims to be involved?