Up until a few years ago, performing medical interventions in end-of-life situations had been proposed as actions centered on the best interests of the dying patient.

The growing demand for organs for transplantation has created a need to increase the number of organ donors (see HERE).

Since the number of brain-dead donors is currently insufficient to meet the needs of patients on the transplant waiting list, medical procedures have been developed in the last decade aimed at ensuring that the organs from donors in cardiac arrest are also suitable for successful solid organ transplantation (see HERE our article about the relation between excellent figures of organ donation and organ donors with cardiac arrest in Spain).

Nevertheless, in order to achieve sufficient organ viability in donors with cardiac arrest, a series of medical procedures need to be performed that have the main aim of reducing the warm ischaemia time to which these organs are subjected, in order to increase the chances of post-transplant success.

An article has recently been published in the Journal of Medical Ethics (1) “Premortem interventions in dying children to optimise organ donation: an ethical analysis”, whose authors Joe Brierley and David Shaw analyze the ethical and legal aspects of premortem interventions performed in dying children, aimed at optimizing organ donation for transplantation following cardiac arrest.

This article examines the legislative aspects (specific to the United Kingdom), and also gives a description and analysis of the elements that, from an ethical perspective, might support – or contradict – the performance of premortem interventions in pediatric patients for organ donation. 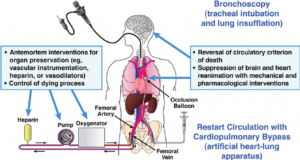 The fact that the procedures for organ harvesting and perfusion must be performed in surgical areas means that the dying process in these patients, who are to be donors, must take place in the theater or areas close to it. This can limit family support, which good end-of-life care practices should entail. The authors of the article believe that that this support can be given equally in those areas and, therefore, should not be a significant ethical impediment. They also believe that, given the frequent loss of consciousness of children in end-of-life states, the fact that the death occurs in surgical areas should not be an obstacle, since it would not involve additional suffering for the child, provided that the parents have given their consent for the death to occur in such areas.

Controversial aspects.  Medical interventions that must be performed to optimize the time of cardiac arrest

One of the most controversial aspects presented in the aforementioned article is the set of medical interventions that must be performed to optimize the time of cardiac arrest. In order for the donor organs to have the highest chance of success for transplantation following cardiac arrest, this should be performed in a programmed and controlled manner. In order to do this, it is often necessary to prolong (or implement) mechanical ventilation and/or administer vasoactive drugs that optimize the cardiocirculatory state before the definitive circulatory arrest. Brierley and Shaw consider these procedures as ethically acceptable if the parents give their consent. Moreover, they also consider that these interventions should be permitted, given that some of them are already carried out to postpone the time of death, for example, to await the arrival of a relative who will be with the child in this final phase of life. Within this section on therapeutic interventions is a reference to an article on the controversial procedure of elective intubation and mechanical ventilation in anencephalic children who have little likelihood of long-term survival. The authors are of the opinion that these procedures should be performed, and are ethically acceptable, considering “parental love and autonomy balanced against an uncertain and arguably minimal risk of harm,” especially if done with appropriate sedation and analgesia. It is noteworthy that the authors themselves say that “living humans ought not to be used only as a means to the end of providing organs”. 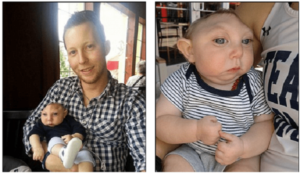 Nevertheless, Brierley and Shaw omit any analysis of the fact that anencephalic children are living human beings, and that the diagnosis of anencephaly is not necessarily associated with an end-of-life stage, but can be associated with prolonged survival.

The third section considered in the article is the performance of specific therapeutic interventions aimed at improving the quality of the organs for transplant. These include:

In the article, the authors say that these procedures are difficult to justify, but that the balance between the harm caused to the patient and the benefit received by the recipient means that these interventions should be considered tolerable from an ethical point of view.

The aspects previously carried out in relation to the interventions performed in organ donation for transplant after cardiac arrest in dying children do not differ substantially from those performed in adults in similar clinical circumstances. The significant difference lies in the fact that premortem interventions before donation in circulatory arrest in children require the informed consent of the parents and, exceptionally, could include the participation of the minor in an advance directive.

The authors adopt the overall attitude of tolerance of these premortem interventions and correctly describe most of the ethical considerations that should be examined in these cases. However, this positive position is weakly discussed and lacks ethical arguments centered on the dignity of the dying person, focusing especially on their favorable position towards these types of interventions, and on the unquestionable benefit that is achieved after performing organ transplantation with optimal organs.