“The medical community should improve understanding through consistent, simplified language, dissociating brain death from organ donation” and resolve the controversy about the different criterion of brain death.

A recent study published by Elsevier – Science Direct (see HERE) “revealed a significant amount of inaccurate information about brain death, affecting the public’s understanding of the concept of brain death and resulting in negative emotions specifically towards physicians, and the link between brain death and organ donation.”

The authors affirm,”Brain death is a difficult concept for the public to comprehend, resulting in a reliance on alternative resources for clarity. This study aims to understand the public’s perception of brain death via analysis of information on the Internet, determine the accuracy of that information, and understand how its perception affects the physician-patient relationship.”

Information available to the public about brain death

The results of the study showed, “Inaccuracies describing brain death inconsistent with national guidelines were prevalent amongst 4/10 Google websites, 6/10 YouTube videos, and 80% of YouTube comments. On average, Google websites were written at a 12th-grade level and 90% mentioned organ donation. Videos were frequently emotional (78%); 33% included negative comments towards physicians, of which 50% mentioned organ donation. All videos included clarification comments questioning the differences between brain death, death, coma, and persistent vegetative states. 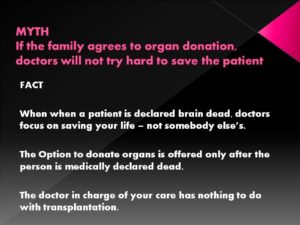 We agree with the authors’ final recommendations “The medical community can improve understanding through consistent, simplified language, dissociating brain death from organ donation, and recognizing the emotions tied to discussions of brain death.” The scientific community should also resolve for one of three criterions are being used for diagnosticate it (see HERE) to the better understanding of organ donors.

See our Special Reports about brain death controversy HERE and conscientious after clinical death. Don’t miss our last Special Report Death of a person based on neurological criteria.