French bishops’ statement on euthanasia. They condemn euthanasia and deplore the lack of palliative care

They condemn euthanasia and also deplore the difficulty in accessing palliative care in France, as well as the lack of training offered to healthcare workers in this area.

Past March, 118 bishops in France signed a statement entitled, “End of life: Yes to the urgency of fraternity!”

In the document, the French bishops proposed six ethical reasons for opposing the legalization of euthanasia and assisted suicide, which are at the core of the bill, and which in turn is the subject of a public debate called the National Consultation on Bioethics; the discussion has been fostered by French President, Emmanuel Macron, and has galvanized the entire country (see HERE).

The Bishops state in the aforementioned document that if the bill is approved, it will deeply upset French society, and they remind the citizens and the parliamentarians who must enact it that this law does not support a fraternal society where we take 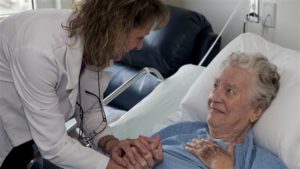 individual and collective care of each other.

They repeat that palliative care in France is underdeveloped, and that the options to alleviate suffering in all its forms are not sufficiently well known by people, so this ignorance must be fought.

In turn, they also show their compassion towards their brothers and sisters who are at the end of their lives, and encourage healthcare providers to offer them the possibility that that end is the best quality possible.

They also deplore the difficulty in accessing palliative care in France, as well as the lack of training offered to healthcare workers in this area, which could contribute to perpetuating patient suffering in their final days. They also say that this is the real reason why many patients request assisted suicide and euthanasia.

They repeat that palliative care in France is underdeveloped, and that the options to alleviate suffering in all its forms are not sufficiently well known by people, so this ignorance must be fought.

Six main ethical reasons to oppose the legalization of euthanasia

Whatever our convictions, the end of life is a time we all will live and a concern we share. We must all be able to think calmly, avoiding all kinds of pressure.

The French bishops continue, saying that they want to express their full compassion for their brothers and sisters at the “end of life”, as the Church has always done.

Furthermore, they restate their opposition to the bill on euthanasia and assisted suicide, based on the following ethical reasons:

The vulnerability of people – young and old – in situations of dependency and end-of-life is not resolved with death, but with support and solidarity, which requires more attentive companionship, and not abandonment to the silence of death.

The bishops of France give the humanitarian and service vision that is often lacking in political debates and offer a solution to the shortcomings suffered by the terminally ill in France. It also is a valuable contribution to the bioethical debate in France by providing concrete solutions and underlining the transcendence of the end of life for the patient and the medical staff.