Skip to content
Home/Bioethics, NEWS and VIEWS, Transsexuality/Parents advised to be attentive to children’s relationships to prevent rapid-onset gender dysphoria

“The influence of transgender friends or adults, directly or through social networks, could be an important factor for the onset of gender dysphoria in these young people”

In a recent study published in PLOS ONE , Dr. Lisa Littman of Brown University School of Public Health in Providence (USA) detected the rapid onset of gender dysphoria or transgenderism during or after puberty in adolescents and young adults who had shown no previous symptoms in childhood.

The study was based on a survey of 256 parents of young people with gender dysphoria, 82.8% with female sex at birth, and mean age 16.4 years; 41% had not expressed a non-heterosexual sexual identification before identifying as homosexual. Almost two thirds (62.5%) had been diagnosed with at least one mental disorder prior to declaring their gender dysphoria, and in 36.8% of their friendship groups, the majority of the members became transgender-identified. 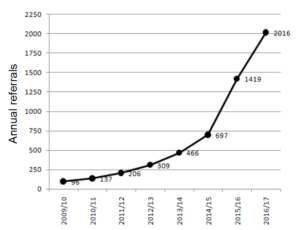 Rapid-onset gender dysphoria appears to represent an entity that is distinct from the gender dysphoria observed in individuals who have previously been described as transgender. The worsening of mental well-being and parent-child relationships and behaviors that isolate AYAs from their parents, families, non-transgender friends and mainstream sources of information are particularly concerning. More research is needed to better understand this phenomenon, its implications and scope.

According to the study, further research is needed to better define this phenomenon, its implication and consequences, although the influence of transgender friends or adults, directly or through social networks, could be an important factor for the onset of gender dysphoria in these young people. All of this suggests the need to take care of the relationships of children and adolescents to try to prevent rapid-onset gender dysphoria in adolescents.