The Catholic University of Valencia has paid tribute to Dr. Justo Aznar

A book dedicated to the person and research career of Dr. Aznar was presented at the tribute. In the work, prefaced by Cardinal Antonio Cañizares, 27 researchers, professors and scientists have collaborated.

Two days before the first anniversary of the death of Justo Aznar (1937-2021), the Catholic University of Valencia presented a tribute book dedicated to his person and research career. In the work, which has been prefaced by Cardinal Antonio Cañizares, 27 researchers linked to the person of Aznar have collaborated. The book offers a multidisciplinary compendium of current issues in bioethics, from a perspective inspired by respect for human 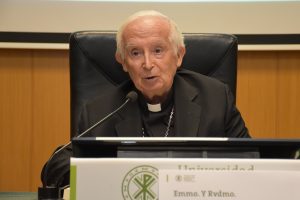 Likewise, the rector of the UCV, José Manuel Pagán, expressed his pride that this young university has had a “master” like Justo for fifteen years: “Pope John Paul II, when in Ex Corde Ecclesiae speaks of the profile of the professor of a Catholic university, speaks of the need to integrate faith and reason, and this is Justo Aznar”. 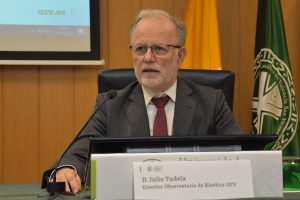 At the presentation, Dr. Julio Tudela, coordinator of the work together with Professor Ginés Marco, took the floor to express his gratitude to the authors and to the rector of the UCV. “Above all, thanks to Justo for his fidelity, for the close affection he showed to all of us and for the best of his legacies: to search tirelessly for the truth in order to become truly free.”

Tudela, who has directed the Bioethics Observatory since Aznar’s death, emphasized that “researching, analyzing, learning, discerning, communicating to contribute to finding the truth of things, of science, of the human being, were Justo’s passion; what he left to those of us who worked with him and learned from him. But also to those who knew him and followed him in his enormous and fruitful work”.

The event was attended by Bishop Emeritus Juan Antonio Reig, who presented the second part of the book, in which he himself wrote a chapter. “Because of their origin, identity and eternal destiny, the dignity of man and woman is very high,” he stressed. “Only love does justice to call someone to this world. Man is made in the image and likeness of God, he is a unity of body and spirit. And God has become incarnate, he has paid the price of his blood so that we can live in freedom. That is why life is always a good thing,” he added. 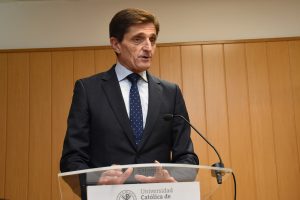 For his part, Professor of Philosophy of Law and Political Philosophy at the University of Valencia and co-author of the work, Vicente Bellver, referred to the last part of the work, dedicated to the vulnerabilities and threats to human life, which the honoree worked so hard on. “Justo began in bioethics when he saw that the most vulnerable human being is the one who has not yet been born. A crusade that he defended and extended to other groups in which he saw the dignity of the person questioned, as in the case of disability”.

In this sense, Bellver acknowledged that “Justo is still very active and now even more so. Justo liked excellence and multidisciplinarity. He was a scientist who was open to thought, while his friend José Sanmartín was a philosopher who was open to science. And from that encounter and friendship there are fruits in this university”.

Another of the speakers was the Honorary Professor of Bioethics at the Catholic University of Murcia, Gloria Tomás, who read an emotional letter addressed to her friend: “You have always been madly in love with your wife, Vicen. How you have protected, honored and defended the family, your ten children, your countless grandchildren and, extending that attitude, the human family, everyone”.

“I wish to insist that, in your family, professional and apostolic kaleidoscope, there is much hidden that only God sees. In that sense, I am reminded of Eliot’s idea engraved on the tomb of the Austrian blessed Franz Jägerstätter, an Austrian farmer who refused to swear allegiance to Hitler in World War II. On the grave it says: ” that things are not so ill with you and me as they might have been, is half owing to the number who lived faithfully a hidden life, and rest in unvisited tombs.” “In your case, only the first part is fulfilled”, she said.

As spokesman for Justo Aznar’s family, his son Justo has taken the floor: “He never cared what they would say and he always stated the truth. I want to thank the Catholic University of Valencia and all the people who have produced this book as a tribute to the person of my father. Without a doubt, his example of professional and personal life has left its mark on all of us. Likewise, he reminded the participants of the most valuable teaching that his father instilled in those who lived with him: “Don’t forget it, the important thing is to go to heaven.”

You can watch the recording of the tribute act below.