This, of course, is encouraging news, since around nearly 830 women die each day of preventable causes related with pregnancy and childbirth. Ninety-nine percent of maternal mortality occurs developing countries, and is higher in rural areas and the poorest communities, according to data from the World Health Organisation (WHO).

Improvement in maternal health was one of the eight Millennium Development Goals (MDGs) adopted by the international community in 2000. With respect to these, countries committed to reducing maternal mortality by 75% between 1990 and 2015. 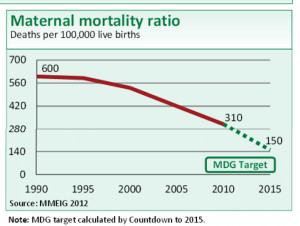 Since 1990, the number of maternal deaths has fallen by 43%. Several sub-Saharan countries reduced their maternal mortality to half, while in other regions, such as Asia and North Africa, the progress has been even greater. Between 1990 and 2015, world maternal mortality rates (MMR) i.e. the number of maternal deaths per 100,000 live births, only fell by 2.3% per year. However, an acceleration in this reduction was observed from 2000, and in fact in some countries, the annual reductions in maternal mortality between 2000 and 2010 exceeded the 5.5% necessary to reach the MDGs.