Reproductive medicine and the production of bioartificial organs

Reproductive medicine and the production of bioartificial organs may be a source of hope in the next few years for patients with degenerative lesions of various organs, among them the reproductive organs. Undoubtedly, in this respect, major advances in stem cell knowledge, especially having identified stem cells in amniotic fluid and the placenta, will allow the development of new therapeutic possibilities in this medical area. Likewise, the potential to produce iPS cells from adult cells of these patients may open another major therapeutic option for them.

Even though all stem cell-related studies are still in the experimental research phase, clinical applications have already been developed using the patient’s own stem cells. 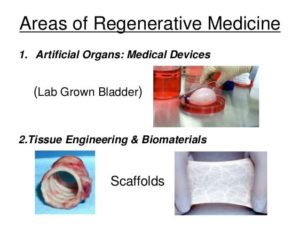 This interesting and innovative clinical field is discussed in an article published in Fertility and Sterility (98; 21-29, 2012), which makes special reference to the latest advances in the construction of bioartificial organs in the reproductive area. Numerous natural and synthetic biomaterials are still at the experimental stage, some biomaterials have already been evaluated their efficacy for the reconstruction of female reproductive tissues. In this review, all the biomaterials cited in recent literature that have ever been used and that have a potential for the tissue engineering of female reproductive organs (see HERE).

In relation to this, one of this fields in which most progress has been made is in the creation of artificial urethras, using a collagen scaffold which is then re-covered with the patient’s own stem cells. Perfectly functioning urethras of up to 15 cm have been produced using this technique.

It has also been possible to reconstruct penises that do not function for various reasons, such as penile carcinoma, trauma, severe erectile dysfunction and congenital penile morphological anomalies, such as hypospadias or epispadias. The greatest technical difficulty is the availability of sufficient tissue from the patient himself, and preventing some complications such as infections or graft failure.

One of the most promising possibilities is the potential to create penile corpus cavernosum tissue, when it is damaged for any reason, although these experiments are in the early experimental phase in animals, especially in rabbits.

Major steps have also been taken in the female reproductive organs, mainly in the production of artificial uteruses in animals, using biodegradable polymer scaffolds which are then filled with tissue produced by the animals’ own stem cells.

We have to mention that Atala and co-workers have successfully performed atififcial penis transplants in rabbits, which were then able to effectively impregnate does. As Atala himself states, one of the advantages of this type of transplant is that the organ generated would be produced mainly using cells from the patient himself, which would reduce the likelihood of rejection.

In conclusion, it can be stated that the production of bioartificial tissues and organs in the reproductive area, in both women and men, is a promising possibility that will undoubtedly reach human medicine in the coming years. Among these, it is urethral reconstruction that has already shown to be a more objective therapeutic option in humans.