Charlie Gard’s parents have privately expressed their concern after discovering that the lawyer appointed to represent their 11-month-old son in court heads a charity that backs assisted dying.

Victoria Butler-Cole, who speaks on Charlie’s behalf in court, is chairman of Compassion in Dying, a sister organisation to Dignity in Dying which campaigns for a change in the law to make assisted dying legal in the UK. Dignity in Dying used to be called the Voluntary Euthanasia Society. 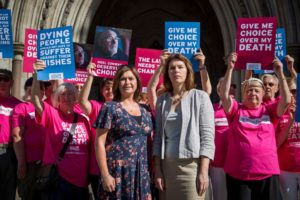 Connie Yates and Chris Gard, from Bedfont, in west London, believe they, as his parents, should speak for Charlie in court hearings that are deciding his fate. They don’t believe their son should have a guardian representing him in court.

Charlie Gard’s lawyer backs assisted dying. Is there a conflict of interest?

As we already know, Great Ormond Street Hospital is seeking to switch off his life support machine and has been backed in court by Charlie’s state-appointed guardian, represented by Mrs. Butler-Cole.

A source close to the parents told The Daily Telegraph: “The family finds it astonishing that the lawyer that appointed the barrister to act in the interests of Charlie Gard is the chairman of Compassion in Dying, the sister body of Dignity in Dying, formerly known as the Voluntary Euthanasia Society. The implication is obvious. It looks like a profound conflict of interest.” (The Telegraph, 7 – 18 – 2017).