Skip to content
Home/Bioethics, BIOETHICS NEWS, SPECIAL REPORTS/The rehumanisation of progress. Intervention of Dr Gines Marco in the academic act of One Of Us

The rehumanisation of progress. Intervention of Dr Gines Marco in the academic act of One Of Us

“One of Us” cultural platform, of which our Observatory is a member, is launched in Paris where more than 300 institutions and intellectuals, from all over the European continent assisted and our Observatory was represented by Dr Gines Marco. We publish below the conference that he gave at the academic event. 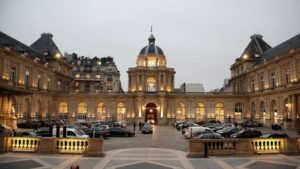 February 23 this year saw the launch of the “One of Us” cultural platform in defence of human life at the Palais du Luxembourg, seat of the French Senate. Moreover, it took place in a markedly academic act, enjoying the presence of internationally-renowned philosophers such as Rémi Brague, Thibaud Collin and Olivier Rey, political scientist Pierre Manent, journalist Marguerite A. Peeters, physical chemist Assuntina Morresi, the Secretary of State for Family and Youth on behalf of the Hungarian Government, former Spanish minister and Member of the European parliament, Jaime Mayor Oreja, the current president of the “One of Us” Federation, and many more.

The identity of this platform has its roots in the European Federation of the same name (“One of Us”), best known at one time for the channelling of a European citizen’s initiative against the destruction of human embryos, eventually defeated by the sitting European Commission. Today, its initial aims not only survive, but also serve as a basis for the configuration of an authentic think tank that awards a special role to European intellectuals, as a necessary background in any subsequent political action.

The low birth rate, crisis of the family and marriage, the denial of Europe’s own cultural identity, attacks on freedom of conscience and expression, as well as depreciation of the concept and meaning of human dignity in the collective imagination

The goal of this platform is no less ambitious: to awaken the European consciousness from the relativist lethargy in which it is immersed, and which has led to the low birth rate, crisis of the family and marriage, the denial of Europe’s own cultural identity, attacks on freedom of conscience and expression, as well as depreciation of the concept and meaning of human dignity in the collective imagination. As Robert Spaemann, recently deceased German philosopher who inspired many of the ideals endorsed by this cultural platform held: “modern civilisation presents a threat to human dignity like never before”. Other civilisations were able to ignore that dignity, but our current one — which knows of it — wants to eradicate it.

The root of that desire lies in the “scientification” of the mind: we consider that rational is the scientific, understanding as such the current model of science. In his proverbial tendency to consider everything in terms of observable and measurable objectives, man has ceased to feel that he is the centre of the world (which happened in the so-called anthropocentric view, typical of the first modernity, proud of the human capacity to possess and dominate nature) to become an observer and measurer of himself as a natural object of study. Moreover, we measure ourselves quantitatively, in numbers, as if that really teaches us something about our being. The inflation of numerical measures (undoubtedly useful in themselves) is an authentic disease of our time.

Apparently, we do not know who we are — that’s why we study ourselves — but we do not study what our way of being is as human beings, that is, our formal qualitative measure. Rather, we only investigate partial and quantitative aspects of our being: medical, psychological, social, etc. We do not in doing so know ourselves. We do know, however, that our descendants will be anthropomorphs, beings not created but produced by us in the laboratory. We do not know who or what man is, but we will produce him.

Furthermore, since the human being is considered just one more specimen in nature — one among others — but with the curious possibility of producing his existence, it turns out that not only is he the most worthy of those who people this world, but perhaps he is the most unworthy.

This unworthiness, today sensed by many, is not a metaphor. We humans act as we believe we are, our action depends both on our being and on the portrayal we present of our being, since we are always “more than we are”, even if the latter is not reflected.

If there are no essential differences in the world — because we think that we are all equally natural — then wanting to present ourselves as superior is pure arrogance. But man — one more being among others that populate the universe — is not thus trustworthy, since, with his capacity for production, he is a threat to other beings and even his own descendants. And an unreliable being is not worthy.

The same characteristic that is considered decisive to attest the dignity of man — his rational freedom — is now the one that makes him appear unworthy. The animal follows its instinct, it is predictable and it fulfils its role in the universe. Man, in contrast, would be a danger to the Cosmos; that is the understanding of so-called Deep Ecology.

The superiority of dignity

Dignity is a concept that has its history, but — in essence and until recently — it has always and in its two basic meanings connoted an idea of superiority. Whether we look at the very quality of being man, or his life in society, dignity implies a superior touch compared to other beings of this world, or compared to other people.

The concept of superiority — suspicious in our Europe that manifests itself as naturalist and proclaims itself “democratic” — is paradoxical. It implies, at the same time, lack of subordination and a certain relationship. But, given that in any relationship there is some mutual “subordination”, as Hegel already showed with his reference to the master-slave relationship, in which the master needs the slave perhaps more than the slave needs him, the idea of superiority asks to be examined in all its nuances, which can best be done when examined in practice. He who, supported by those who serve him, does not reach righteous autonomy, is unworthy, as is he who uses the relationship to take advantage of others. In contrast, he is worthy he who stands on his own two feet — acting with autonomy, conscience and responsibility for his actions — and at the same time serving other human beings and all of creation, taking care of it (and not playing God).

The opposite of dignity is indignity, but the contradictory — which has nothing to do with it — is vulgarity. The ancient world has already provided two definitions of the vulgar person, extremely accurate in their conciseness: vulgar, says Cicero, is the person who does not know how to grasp greatness; vulgar, says Seneca, is the person who cannot distinguish the apparent from the real, and follows appearances.

Both definitions have the same essence, because everything truly real possesses greatness, while the world of appearances is that of smallness of spirit. It is paradoxical — or at least it seems so — that a social system such as the present, which was born with the desire to put an end to vulgarity, has largely generated it. We live in a world of appearances in which any authentic greatness of spirit is rejected. As Rafael Alvira contends, we are individualists, we constantly seek security, we live on the epidermis of reality and we have ceased to be grateful.

The grateful person, in contrast, is the one who realises all the value of each reality, no matter how small. The grateful person is the poor in spirit, because he realises that the other, or the other person, has something to give me, something that I am missing. For that reason, it can be said that only the noble expresses gratitude, has a big open heart.

True wealth is in the capacity for creation, in life. It is the exercise of that capacity that enriches us, that ennobles us.

To discover the force of reality, of life, as a gift, is to capture its loving dimension: reality is given to me. And that is where we glimpse creation, because love creates and it alone is creator. Only those who truly love the sciences, the technologies, the arts are creative. The person who does not like them abandons or cultivates them poorly. The person who likes them always believes he knows nothing, he is always beginning, his wisdom springs from the awareness of his indigence.

Perhaps what is happening to us is that, without realising, we do not dare to be what we are: beings who must conquer their autonomy in and through service, especially with the most vulnerable. To be more owners of ourselves and to better serve society — from the intellectual point of view as well — are two of the great challenges that lie ahead.

To properly assess these major challenges, the implementation on 23 February this year of the manifesto supported by the “One of Us” cultural platform could help. The manifesto, entitled “For a Europe faithful to human dignity”, does not intend become a political agency, but rather an intellectual hothouse that curbs that deep moral crisis that Europe is going through and which is reflected – in accordance with the manifesto presented – in a deep disloyalty towards the five constituent elements of its identity, namely the triple inheritance that it has received: Greek philosophy, Roman law and the Biblical religions of Judaism and Christianity, as well as the two creations of Europe: modern science and the recognition of the fundamental freedoms.

The European citizen’s initiative in favour of the human embryo had the merit of making the humanity of the newborn visible to the institutions of the European Union. Now, the challenge is to once again put the principles and values that allow human life in all its dimensions to be protected at the centre of the European public debate. For that debate of ideas, the aim is not to return to a scenario of premodernity in which freedom, reason and science occupy a residual place. Rather, the intention is that despotism, irrational overflows of affection and ignorance do not assume undue prominence in the public space. If this goal is achieved, the ensuing effort will have been worthwhile.

Dean of the Faculty of Philosophy, Anthropology and Social Work