Global fertility rates decline. First study to provide data on the fertility of the worldwide population

The world population ages, TFRs decreased in all countries and territories of the world between 1950 and 2017, 33 countries showed a negative population growth rate between 2010 and 2017

Knowledge of world population data and their evolution is fundamental for conducting demographic and epidemiological studies, as well as to have adequate international indicators for health and development projects. 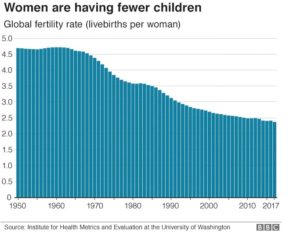 In November 2018, an exhaustive study was published in The Lancet on these issues, which includes an analysis of the population in 195 locations, covering from 1950 to 2017. 195

In contrast, TFRs decreased in all countries and territories of the world between 1950 and 2017. In 2017, the lowest fertility rates were those of Cyprus, with 1.0 livebirths per woman, while the highest were those of Niger, 7.1. In women under 25 years, the fertility rates in 2017 ranged from 0.08 livebirths in South Korea to 2.4 in Niger, and among women over 30 years, from 0.3 livebirths in Puerto Rico to 3.1 in Niger.

In addition, 33 countries showed a negative population growth rate between 2010 and 2017, many of which are located in Europe, whereas the rate increased by more than 2.0% in 33 of the 46 countries in sub-Saharan Africa.

The authors concluded that the variation in population growth by country, age and population group is fundamental for planning economic development and social needs.

Even though TFRs are declining, the world population continues to grow as mortality rates fall, albeit with diverse patterns at national level and across age groups.

In the authors’ opinion, this is the first study to provide transparent and verifiable data on the fertility of the world population, and may be used to make decisions with respect to attitudes in relation with the various social problems that this may entail.

This report only made reference to some of the global data included in the article in question, but it also shows detailed data by nationality and population group of most of the countries of the world. This study, in which a large number of collaborators and institutions participated, was funded by the Bill and Melinda Gates Foundation .

There is no doubt that this unprecedented global decrease in the fertility indexes is an important problem with serious demographic and social consequences.

Realated post American official figures on fertility. The report shows that it has fallen to its lowest point in the last 40 years